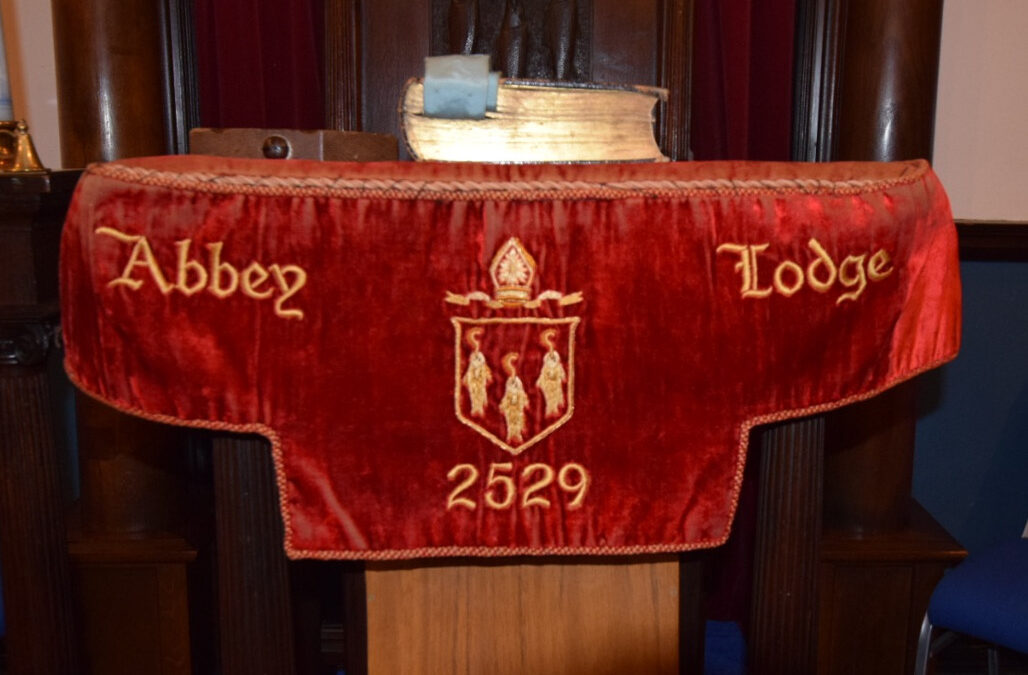 On Thursday 26thSeptember 2019, 38 Brethren met at Whalley Masonic Hall to celebrate the 125thanniversary of Abbey Lodge No. 2529.
In attendance was the Assistant Provincial Grand Master, WBro Alan Kirwilliam, who was accompanied by many Grand Officers. Visitors also included the Chairmen of both Districts in the Northern Area. WBro Bob Allan represented Burnley & Pendle District and WBro David McGurty represented East Ribble District. Also amongst the 18 visitors was WBro Fred Stansfield, an honorary member of Abbey Lodge, who had travelled all the way from his home in Turkey to attend this most memorable occasion.
After the Worshipful Master, Bro Ian Ferrier, opened the Lodge, WBro John Whitney, as acting secretary, read out the dispensation for holding this special 125thmeeting of Abbey Lodge on this date, after which the Worshipful Master offered the gavel to WBro Kirwilliam. He said he was honoured to be offered such a privilege and politely declined, thus allowing the Worshipful Master to have the pleasure of conducting the Lodge on such an auspicious occasion.
WBro Jim Sutcliffe, the ‘father’ of the Lodge, then presented a very interesting, informative and fact-filled history of the Lodge’s most recent 25 years. This carried on from the previous 100 years history, which had been given at its Centenary celebration. As a preamble to his presentation, WBro Sutcliffe thanked WBro Stuart Smith for much of the research that had gone into the presentation, explaining that WBro Smith was unfortunately unable to attend that evening. In his absence, WBro Smith was praised and thanked, having been Secretary of Abbey Lodge for the last 25 years. He continues today in this office, serving the Brethren and Abbey Lodge in exempulary fashion.
The Worshipful Master thanked WBro Sutcliffe for the presentation saying it is not only the amount of research that made it most interesting, but also the manner in which it was presented.

Bro Andrew Dodd then proceeded to present a five minute ‘Nugget’, which was taken from the UGLE’s web based Solomon resource. It was an explanation of the Entered Appprentice Apron, which was warmly received and enjoyed by all the Brethren. Later in the evening WBro Kirwilliam encouraged the Lodge to present these ‘Nuggets’ on a regular basis and include them as an item in the Lodge Summons.
After the Alms collection, the Director of Ceremonies announced that the Worshipful Master of Abbey Lodge had a pleasant duty to perform. Bro Ian Ferrier then presented a cheque for £1250 as a donation from the Lodge to the East Lancashire Masonic Charity. This was gratefully received on ELMC’s behalf by the APGM. He was delighted and thanked the Lodge for their most generous donation.
At the ‘risings’, the Past Deputy Provincial Grand Master VWBro Nigel Bramley-Howarth gave greetings from United Grand Lodge, WBro Alan Kirwilliam gave greetings from East Lancashire Provincial Grand Lodge and WBro David McGurty gave greetings on behalf of the all visiting Brethren.
The remainder of the business being concluded, the Lodge was closed in peace and harmony.

The Brethren then packed their cases and sped from the Masonic Hall to the local Whalley Golf Club, where a resplendent meal was awaiting them. An excellent evening of good food, wine and great company was about to commence.
All present received a special commemorative badge, which had been provided by Bro. Paul Christodoulou and a bound history of the Lodge’s most recent 25 years which had been meticulously researched and compiled by WBro Stuart Smith.
In addition, to mark this special occasion, the Worshipful Master, Bro Ian Ferrier, had produced and provided a wonderful “125th. Year Anniversary Edition Members’ Ritual Handbook” for every member of Abbey Lodge…… No more excuses!!
It was certainly a night to remember and a wonderful 125thcelebration all round!