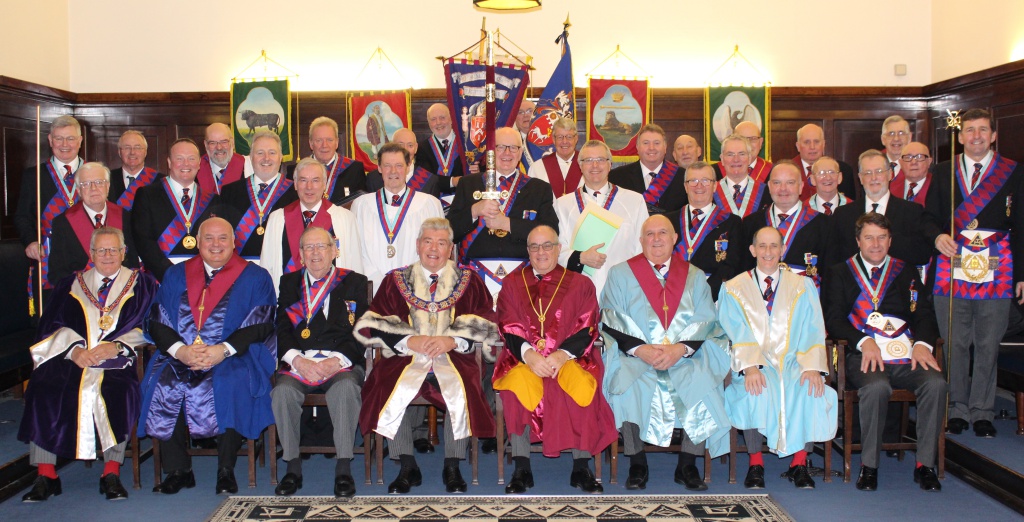 On Friday 18thJanuary 2019 history was made at Unitas Fratum Chapter No.7958. E.Comp George Martin Cattanach, Past Provincial Grand Scribe Nehemiah, celebrated 70 years in Holy Royal Arch Masonry. This certainly was a very unique and special day as this was the 1stHoly Royal Arch 70th Celebration in this Province and what a great occasion it was.
The Chapter opened at 11.30am to perform Chapter business before the Most Excellent Grand Superintendent Sir David Trippier, RD, JP, DL, accompanied by a Provincial Deputation were received into the Chapter, which was full to capacity for this special occasion with many distinguished guests in attendance.
The First Principal, David Bannister, offered Sir David the sceptre, which he duly accepted. The Second and Third Principals were exchanged with the 2ndProvincial Grand Principal, Harvey Basger, and the Assistant to the Provincial Grand Principals for Manchester and Salford, David Basger who acted as 3rdProv G Principal.
Sir David introduced the Provincial Deputation, before delivering a most excellent tribute to George, on what is a very unique and distinguished career as a Royal Arch Mason.
Colin Smith gave a very personal and in depth tribute to George outlining his many achievements outside the Chapter as well as inside. Sir David commented afterwards “that it was a very impressive tribute to a most impressive person”
Andrew Holland, the Assistant Provincial Grand Scribe Ezra then read out the 70thCelebration Certificate, which Sir David then presented to the recipient.

EComp George Cattanach was then paraded around the Chapter by the Provincial Grand Director of Ceremonies, David Bristol, and received a standing ovation from everyone present.
The Social Board was a very happy and joyous occasion, and all the guests in attendance were treated to a most excellent meal.
Kirk Mulhearn, APGP for the Western Area, proposed the toast to the Three Principals, and David Bannister responded.

Sir David responded to the toasts proposed, and added a personal tribute to George Cattanach.

Brian Carter proposed the toast to the health of George in a very warm personal manner. The response was very well received by all present who stood in admiration at this magnificent achievement. History was made this day.