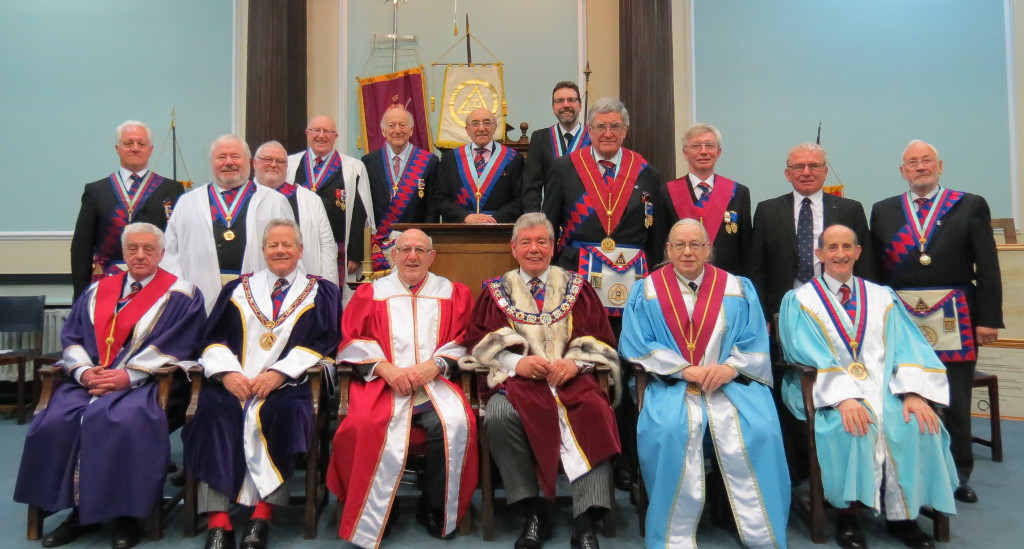 Monday 22nd January saw Blair Chapter 815 host a Joint Convocation at Hemsley House, Salford with the Most Excellent Grand Superintendent Sir David Trippier, RD, JP, DL in attendance along with a Provincial Delegation.
The Chapter opened promptly at 6pm with nearly 90 Companions in attendance. EComp David Bristol, the Provincial Grand Director of Ceremonies was announced and declared that outside the Chapter room was the Most Excellent Grand Superintendent Sir David Trippier, along with Harvey Basger, the Second Provincial Grand Principal and his brother David Basger, the Assistant to the Provincial Grand Principals standing in as the Third Grand Principal accompanied by Brian J Carter, Edward W Barlow, Chad Northcott, Chris Welton and other Provincial Officers.
Sir David was admitted along with the Provincial Delegation and after being greeted by the 1st Principal Ken Turner, he was offered the Sceptre which he accepted on this occasion. Harvey Basger was placed in the 2nd Principals chair and David Basger was placed in the 3rd Principals chair with Ken Olive and Terry Bailey relinquishing their respective chairs. Sir David greeted everybody, welcoming them to the meeting and saying how nice it was to be back in Salford and thanking the members of Blair Chapter for hosting the meeting.
There then followed a presentation from the East Lancashire Royal Arch Presentation Team entitled “Craftier Companions and other Stories”.

I will not go into too much detail as it would spoil the presentation for those Companions who have not seen it, I will simply say that if you have the opportunity to see the presentation then you must see it. Educational, entertaining, humorous, cheeky and extremely enjoyable, the Companions present witnessed an excellent presentation from the Team. John Cavanagh and the team were thanked by Sir David at the end of the presentation even though he found himself (and his wife, Lady Ruth) referred to in one of the stories. The Provincial Delegation retired after the Three Principals were returned to their respective Chairs.

The great atmosphere continued downstairs and along with the good food and company it was an extremely good occasion. Ken Olive gave the toast to Sir David and once again Sir David responded with aplomb and made those present laugh with his tales.

Special mention was made of John Cavanagh and the Presentation team and in particular Kevin Hall who found himself presented with an Equity card for his work upstairs! Sir David then retired wishing everybody a safe journey home. The social board concluded with the raffle being drawn and which raised £240 for masonic Charities. A great night and well done to the ELRA Presentation team for their work and Blair Chapter for their hospitality.