Celebrating 50 years in the Royal Arch for David Thornton 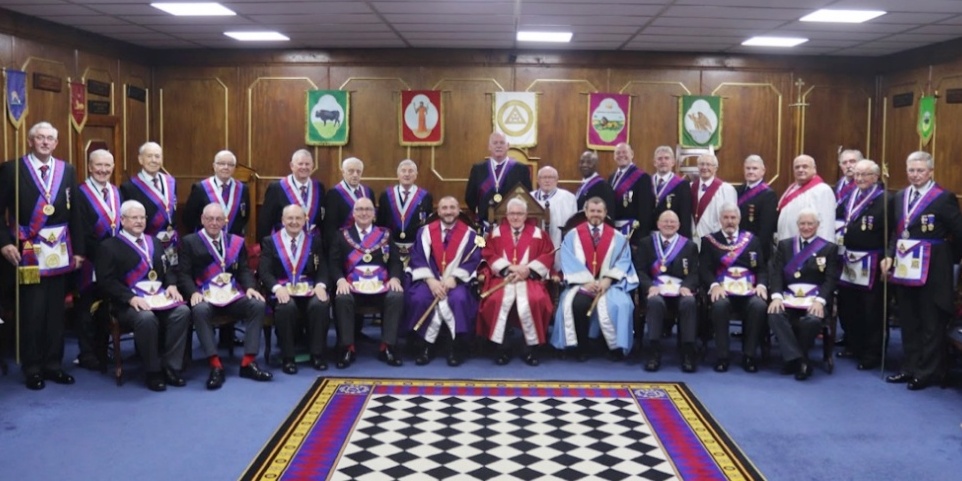 A Convocation of the Red Rose of Lancashire Chapter No 9640 was held at the Masonic Hall, Audenshaw by dispensation on Friday 29th October, 2021 for a very Special Reason.

Celebrating the personal 50th in the Royal Arch of our dear friend, David Thornton. Such a hardworking volunteer in so many social and charitable settings.

The Evening was supported by our Deputy Grand Superintendent, Martin Paul Roche, who presented David with his 50-year Certificate. Martin was supported by a Provincial Delegation, which included the Provincial Grand Scribe N and 2 APGP’s along with several other Distinguished members. EComp Roche gave a historical account on what had taken place on 4th October a date in 1971 when David had been exalted into the Royal Arch during which he gave his congratulations on achieving 50 years in the Royal Arch.

EComp Ken Olive then paid tribute to his long-standing friend.  He commenced by confirming his full name as David Jan Thornton and explained the reason for the middle name being the name of a Dutch uncle. Ken then related at length his schooling, holidays in North Wales, his love of ice cream and a lifelong involvement with the Scouts Association together with being a Police Cadet and his subsequent promotions during his service. He made mention of his University Course and his involvement with the choir whilst there. He was complimentary on his work with the local church and church hall and much to everyone’s amusement he concluded with a tale of dressing up as a female which was met with laughter and a spontaneous round of applause.

The meeting was held at Audenshaw, so that the Companions of both the Red Rose of Lancashire Chapter No. 9640 and Aldwyn Chapter No. 5712 could be in Attendance. In all there were 44 in attendance, showing the Support that David rightly deserved, being a past APGP.

David is a Great supporter of both these Chapters, and is currently Scribe E. of both.

You could say David is a Royal Arch Mason through and through, as he is also a member of C3747 East Lancashire Provincial Grand Officers Chapter and C2447 Palatine Chapter.

David’s Working life was just as full as his Masonic Career, as they say if you want something doing, as a busy man, “David is such an Example”.