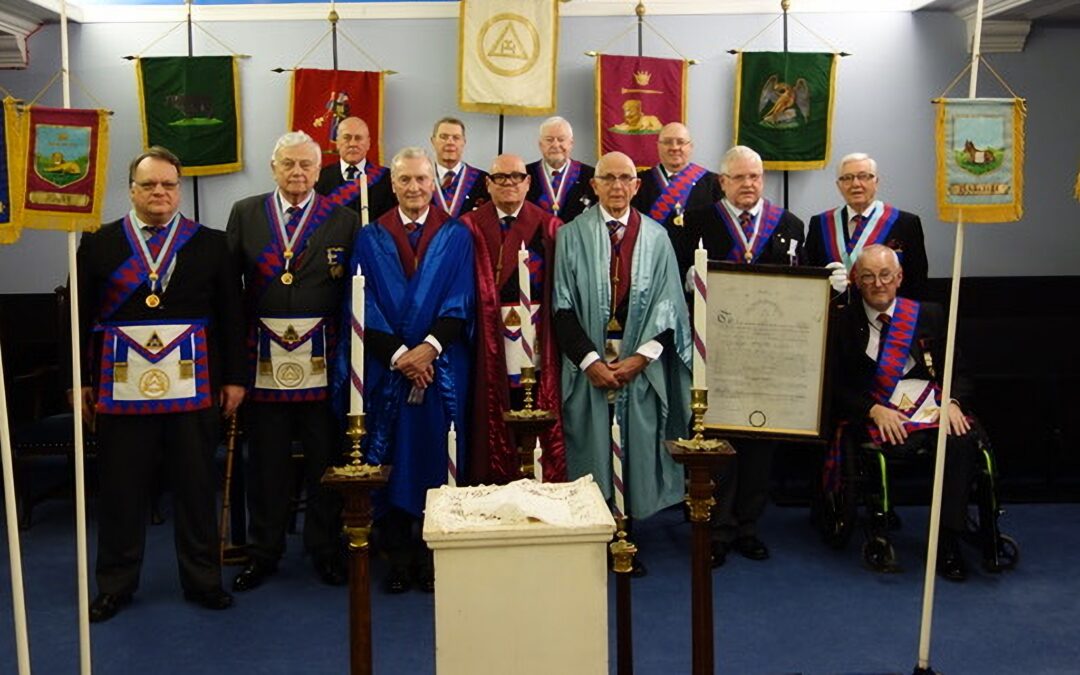 Consecrated during the latter part of WW2 at Bridge Street Manchester, Tuesday the 8th of February 2022 saw the final meeting of Papyrean Chapter No 5771. In his historical address, acting J, EComp. Robert G Prestwich PProvAGSoj., informed the Companions that the lead role on its consecration was taken by EComp Lt-Col Sir Alan Sykes JP PGSN, assisted by other Grand and Provincial Officers.
Whilst the Chapter flourished during the 1950s, unfortunately this growth could not be sustained and in subsequent decades the membership actually tailed off to a point when, in the early 1980s, it was felt that the Charter would have to be returned to Supreme Grand Chapter. However, rather than pursue this route, a move out of Manchester to Bury, where there was a strong Masonic fraternity in the paper trade was proposed.
Thus in 1984, the inaugural meeting was held at Parson’s Street in the presence of MEGSupt Leslie Hiles PGSN, together with a Provincial Deputation. As a consequence, an extension to the life of the Chapter was facilitated and in 1994 the Chapter was actually able to celebrate 50 years in Royal Arch Masonry.
Unfortunately, once again the dynamic of the Chapter had begun to run out of steam and in 2020 it became clear that once again ‘the writing was on the wall’. Hence, with no apparent alternative on the horizon, at a regular meeting in December 2021, the members voted unanimously to close. This was particularly poignant for EComp Prestwich as his family (i.e. father and son) have been in the Chapter since its consecration.

At an appropriate point during the meeting, the Chapter members were asked to form a square on the floor of the Chapter to enable the Charter to be passed from one to another for one last look. The Charter was then handed by ME EComp Mark Smith to the representative of the MEGSupt Designate, EComp Aubrey Oldham, at which juncture the Chapter was effectively closed. On receiving the Charter, EComp Oldham expressed his heartfelt sympathy to the members and concluded with a closing eulogy poem. He then requested the Area RADO EComp Andrew Kinsey to carry the Charter out of the Chapter and he was followed by Papyrean members.