Based on a lecture previously given by the The Rev’d Neville Barker Cryer – 20 minutes
Why are Moses, Aholiab and Bezaleel so important and who were the latter two anyway? Aholiab and Bezaleel are only briefly referred to, whilst Moses does have a modest airing in the part of our ceremony referring to the signs, or in one of the Installations of the Principles.

Moses, Aholiab and Bezaleel take pride of place over King Solomon as the creators of the worship place of Jehovah [the Tabernacle]. Moses was not the Tabernacle’s Craftsman, but the person who whom the Sacred Name has been revealed.
This lecture tells us that Bezaleel was the Hebrew who had studied under the foremost goldsmiths of Egypt and had been instructed in decoration by Pharaoh’s Master of the Jewellery He had the ability for planning skilful designs and every kind of artistic work in gold, silver, bronze, jewels and wood. Because he had shown such innate skill and application, he had escaped being sent to the mud pits to make bricks. It is not only in the Bible that we encounter Bezaleel. He is present in some of the oldest Speculative Masonic writings that we possess.
Bezaleel is part of our tradition from the earliest days.
What about Aholiab? He was above all others in the weaving of the figures into purple cloth. Under his direction were made the three curtains for the entrance to the Sanctum Sanctorum, the blue, purple and red with an inner veil of plain white cotton. The Super Excellent degree [or passing of the Veils] has been lost to English Royal Arch Masonry, but the parting of the Temple curtains remains on our 2nd and 3rd Degree tracing boards.
This paper expands our knowledge of these important characters in the Masonic tradition. 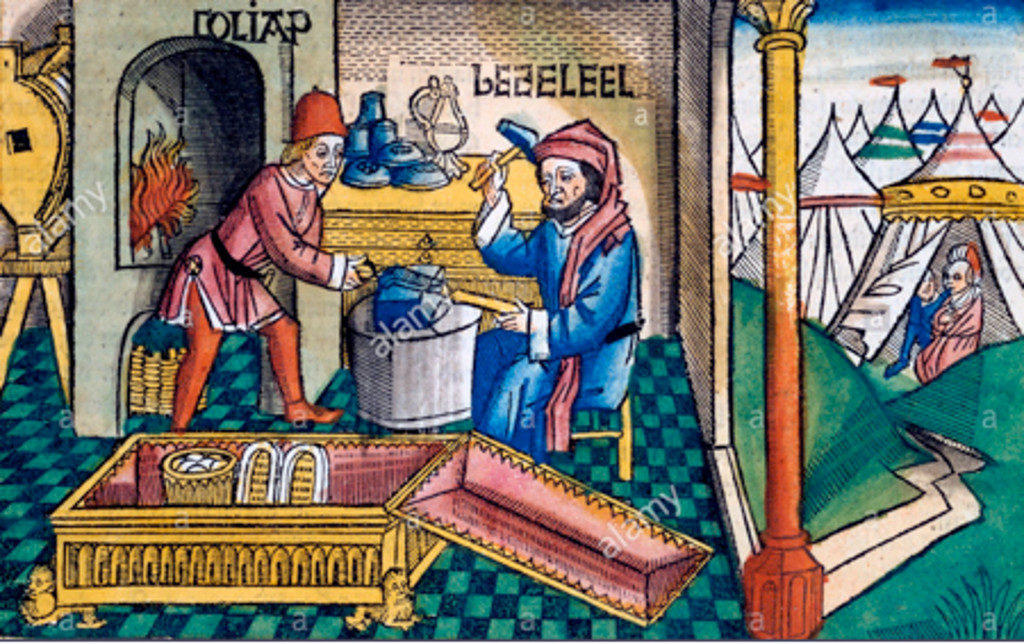