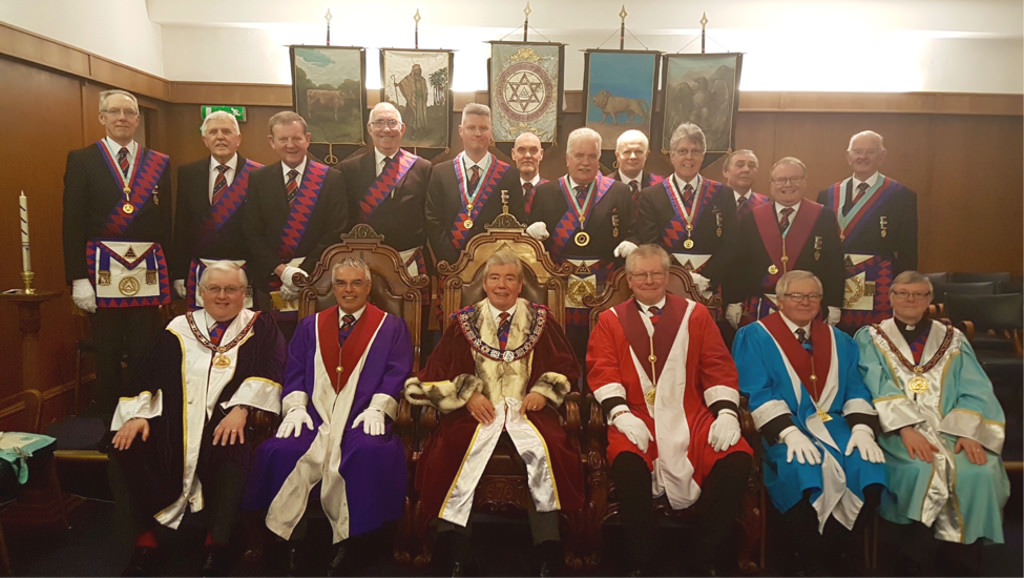 Wednesday, 22nd February saw over 80 Royal Arch Companions assemble at Accrington Masonic Rooms, Adelaide Street to support Leopold Chapter No 1775 who hosted the Northern Area Joint Convocation. The Chapter took on a different look than a normal meeting as the main business of the evening was to receive a demonstration of a previous presentation held at Mill House Masonic Hall, entitled ‘From Darkness to Light. An introduction to the Royal Arch’.

The Provincial Grand Principals were then invited to take the Three Principals chairs, whereupon the ME Grand Superintendent said how delighted he was to be present at such a well attended meeting and expressed how much he was looking forward to the evening.

EComp Paul Aspinall PGStB, Assistant to the Provincial Grand Principals, then introduced the presentation before the narrator orchestrated the journey of a Master Mason, played by Comp Gordon Marchant of Leopold Chapter, from the end of the Third Degree through the ancient history, to becoming a Royal Arch Companion through an allegorical story of the rebuilding of King Solomon’s Temple. He was supported by the Companions of the Chapter as well as EComp Alun Davies PProvDepGDC, RADO, who took the role of Principal Sojourner guiding the candidate along his journey from darkness into light.

Following the very well received presentation, EComp David Mottershed the First Principal of the Chapter, had a very pleasant duty to perform by presenting Sir David with a cheque for £200 for the benefit of the ELMC. This was gratefully received.

The festive board was a monumental event with the Companions enjoying a wonderful three course meal as well as the obvious companionship and fraternity pervading the room. Sir David in his response once again thanked Leopold Chapter No 1775 for hosting the very successful event. He went on to say how important these events are as it gives him the opportunity to meet as many Royal Arch Companions as possible. He continued to thank the Presentation Team and concluded by highlighting the events for the Tercentenary Celebrations and how important it is to give these the support they deserve.

Before the final toast of the evening the First Principals of both Accrington Chapters, hosts Leopold No 1775 and Bank Terrace No 462, presented EComp Aspinall with a personal gift and flowers for Mrs Aspinall in recognition of the work he has undertaken for the District during his tenure as an Assistant to the Provincial Grand Principals. EComp Aspinall was visibly moved by the presentation and expressed delight at the great privilege it had been to serve the Province in his role.