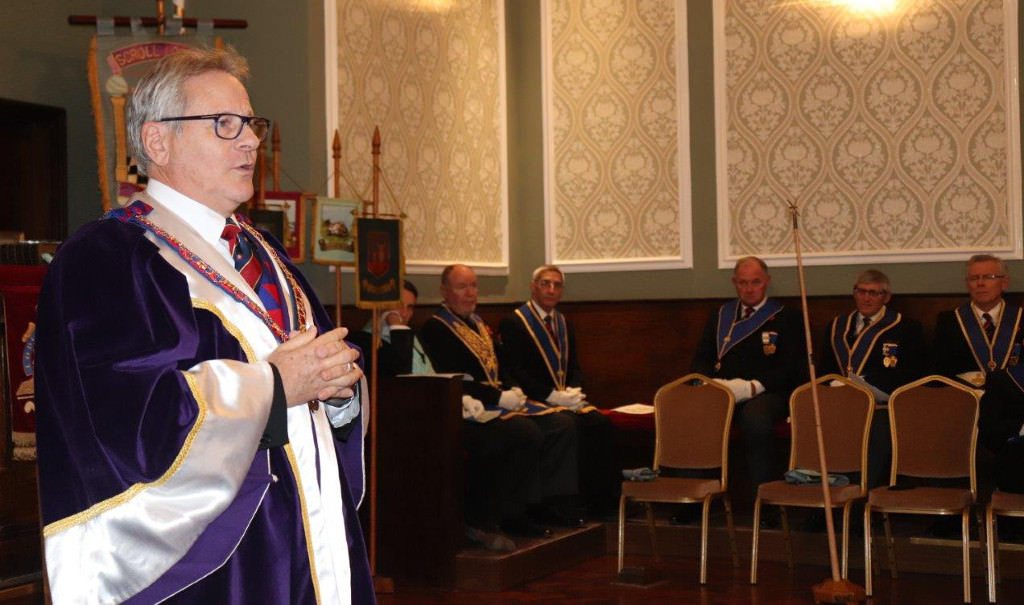 Officers from Provincial Grand Chapter came to town on Thursday 1stNovember, to present their ‘Talking Heads’ Production, and Arkscroll Lodge 6594 were very pleased to host them. A goodly crowd from throughout the Manchester City Area filled the Lodge room, eager to watch and listen, as our ‘thespians’, Companions Chris Cunliffe (C Union 268), making a very assured debut, Jonathan Berg and Stephen Thomson (both C Ark & Menorah 6594), were joined by the Narrator, EComp Len Hayes PGStB, PastAPGP. Manchester Masonry would like to take this opportunity to thank Len for all his hard work in bringing ‘Talking Heads’ to this and all other Areas within the Province of East Lancashire.
Offering their support, were EComp John Christopher Welton, PGStB, APGM for the Manchester City Area, EComp Harvey Basger, 2ndProvincial Grand Principal, and APGPs, EComps David Basger and Paul Bowen.
The Lodge was called off, the ‘Talking Heads’ Team introduced, and EComp Hayes began the narration. Informative and enlightening, (but ever so slightly tongue in cheek), the presentation acts as an aide-mémoire to those Companions lost along the wayside that they are missed, and those who have not (yet) been exalted in to the Holy Royal Arch why Chapter is essentially the completion of a Craft Freemason’s Third Degree, and an enhancement to his Masonic journey.

EComp Len Hayes, PastAPGP, gives the JW of the Lodge food for thought.

Not wishing to give the plot away for those who not yet experienced ‘Talking Heads’, let’s just say it is a revealing and Masonically educating work, all delivered with a lovely light touch. The basic set up is a Brother who is not yet in Chapter eliciting information about the Holy Royal Arch from two of his Companion Brethren. Len is always on hand to provide detail and factual information as background.
The Q&A session that followed further enlightened the attending Brethren, with some very inciteful queries and thoughtful, and thought-provoking answers. EComp Harvey Basger was especially imposing with his knowledge of the Regalia of the Chapter, its history and significance, and when the Team had finished, many a Mason and Companion felt they had made a daily advancement in their Masonic understanding.

WM of Arkscroll Lodge, WBro Elliott Moss, thanked the Team, and they retired, having promised to re-join us at the Social Board, and the Lodge was called-on.
Fine wines and good food proliferated at the Social Board, happily married to droll Toasts and amusing responses. Companionship flowed, and Holy Royal Arch and new Companions will be all the better from this wonderful evening.

Our ‘thespians’ have the audience in their hands!!