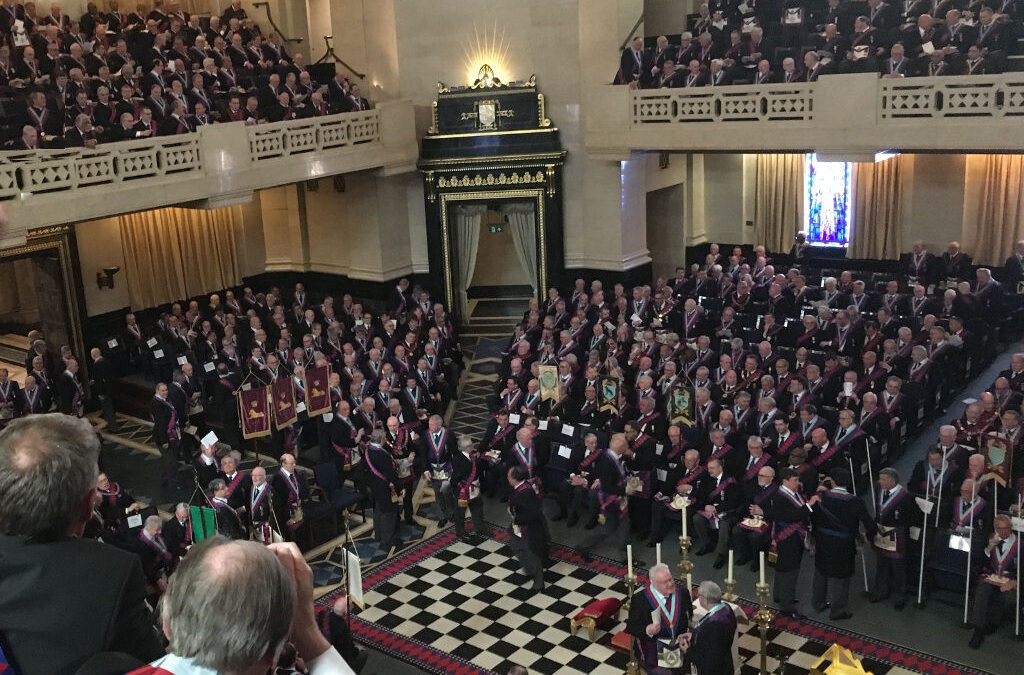 The Investiture meeting of Supreme Grand Chapter is the pinnacle of the Royal Arch Year.
The meeting commenced at 1100 on Thursday 26thApril 2018. A large contingent of East Lancashire Companions were staying at the Tavistock Hotel and had spent the evening before either in local restaurants or at the Festive meal for UGLE. Everyone had arrived back at the hotel bar by 10pm where….. well let’s just say a jolly evening was had by all.
So, an early rise on Thursday morning for breakfast to secretly review the state of fellow companions was followed by the most pleasant of wanders down to Freemasons Hall on Queens Street for Supreme Grand Chapter.
Where do I start? Lets start with the hall. It is AMAZING!!!! STUNNING!!!!! BEAUTIFUL!!!!! And many other words beyond. It was also huge and bustling with junior companions to acting Grand Officers. The splendour of the Grand Temple blended with the colours of the Royal Arch is enough to make the most rigid of jaws drop.

Once seated the anticipation increased as the atmosphere approached boiling point. The Deputy Grand Director of Ceremonies informs one and all of what to expect, how to behave and the usual house keeping information. Then the hail is given and the Grand Officers parade in. Pomp and Ceremony at its absolute best. The Grand Superintendents forming columns through which the three Grand Principals process. Supreme Grand Chapter is opened in the manner to which it  has been accustomed to for hundreds of years and was just excellent.
The business of the Chapter is conducted with the main item of business being the investitures. The following Companions from the Province of East Lancashire received appointments or promotions;
First Appointments
John RT Cavanagh – PGStB
John AC Porter – PGStB
Brendan F Harte – PGStB
Promotion
Wesley Marchant – PAGSoj
Once all the business was concluded the Chapter was closed in equal splendour and the companions retired to the Grand Connaught Rooms for the festive board.

All of the East Lancashire companions were seated in the same area. Great food and company were enjoyed by all. It really was just lovely.
My first trip to Supreme Grand Chapter really allows me to tell you all that should the opportunity present itself for you to attend that you really should grab it both hands, hug it tightly and never let it go. It was brilliant.