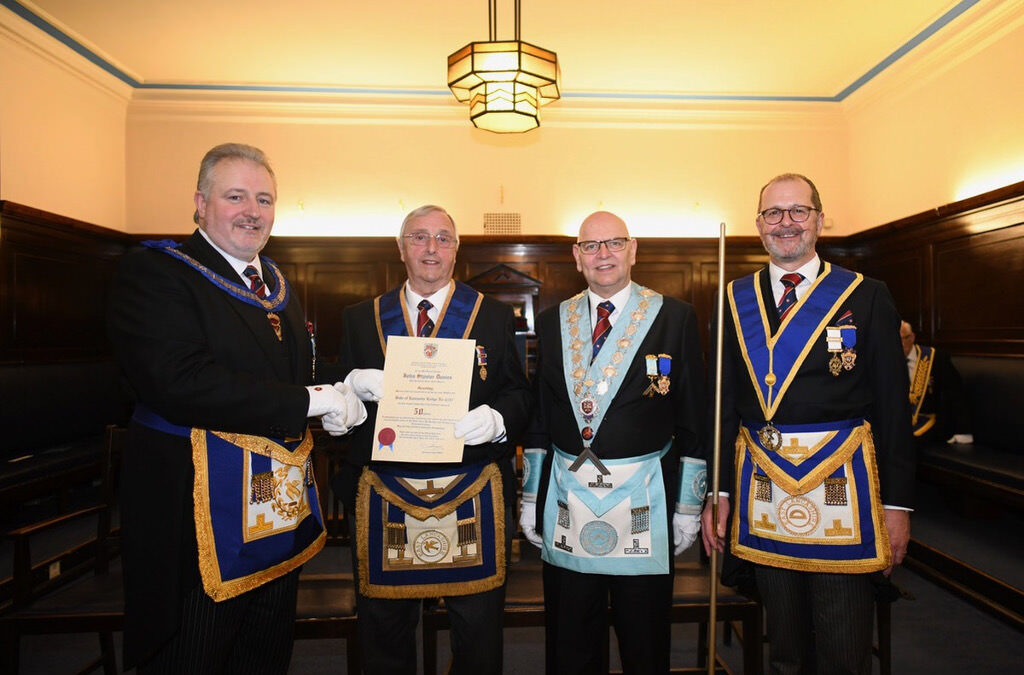 On Wednesday May 2nd at Ashday Lea Masonic Hall, Rawtenstall, the Duke of Lancaster Lodge 4207 helped WBro John Stanier Davies to celebrate his 50 years, not only as a freemason, but also as a member of this lodge.
Along with a large gathering of visitors the lodge was pleased to receive the Assistant Provincial Grand Master for the Western Area, WBro John A Griffin, PSGD, together with a District Delegation.
WBro Griffin accepted the gavel from the Worshipful Master, Bro David William Ashworth, and duly introduced the District Delegation. Once WBro Davies was appropriately seated in the centre of the lodge, WBro Griffin invited WBro Geoffrey Guy to read a portion of the minutes from the ceremony when John was initiated 50 years ago.
A tribute was given by WBro Brian Daber who had been a friend of John’s for almost 50 years. After he had given a resume of John’s career in freemasonry, WBro Griffin presented John with his illuminated certificate together with a letter of congratulations signed by Sir David Trippier, Provincial Grand Master. The ceremony concluded with John being paraded around the lodge, to the acclaim of all present, by the  ProvDepGDC, WBro Phillip Collier.
The social board was a little different from the norm as several members of the lodge were called upon to assist with serving the meal due to the sudden illness of the hall chef. In very difficult circumstances and at very short notice an excellent meal was enjoyed by all.
After all of the usual toasts Bro Davies was presented with a beautiful pair of engraved glasses.