7 minutes
This Lecture explains a mystical knowledge of the degree and comprehends the forms and explanations of the several signs.
The 5 signs are first briefly explained and then demonstrated, with Companions copying the narrator Afterwards, a full and at length explanation of them is given.
An explanation of the Triple Tau follows.
In ancient times, it was a Custom for all operative masons to put their own mark upon the stone. It is explained that at the Completion of K S T. H A B, the Chief architect, would have placed his own mark at some conspicuous portion of the building, but on his untimely death none was found and concluded that no such mark existed. A further explanation follows when discovery was made of the vaulted chamber, and what was found therein.
The w…d upon the circle is the Hebrew word for God. This sacred word is indicative of the Eternity, the Omnipotence, the Omniscience, and the Omnipresence. A short explanation ensues, along with explanation of the Triangle in the days of Pythagoras, which was esteemed as the most sacred of all emblems. 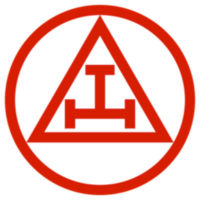