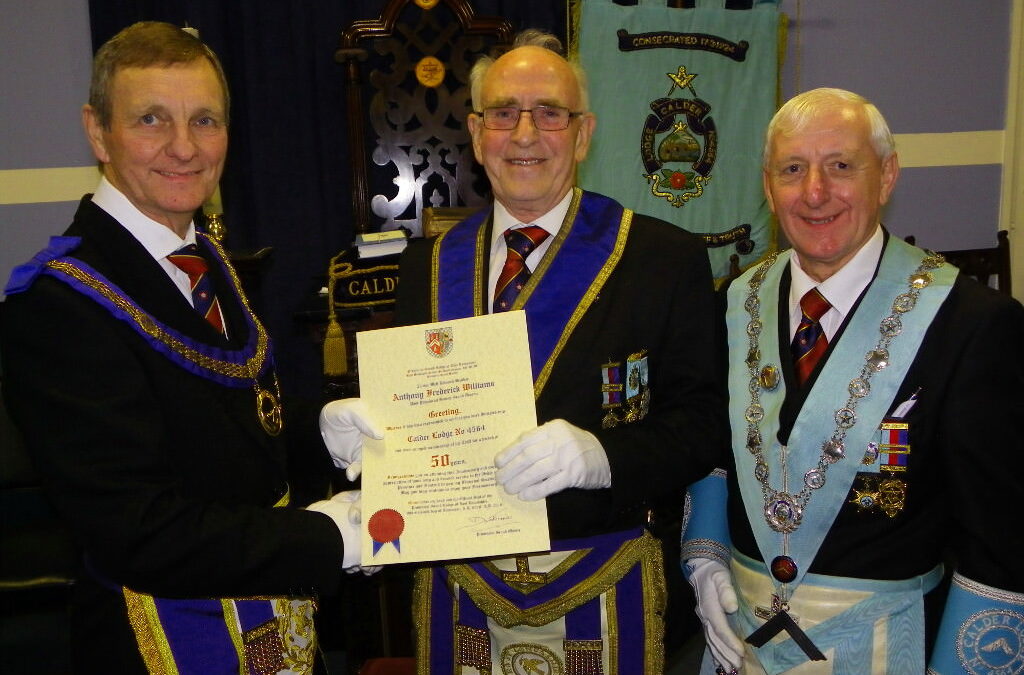 Almost Fifty Brethren, including WBro John R. Farrington, PSGD, The Assistant Provincial Grand Master for the Northern Area of the Province of East Lancashire, accompanied by Grand Officers, Provincial Officers of the year and a District Delegation, signed the Tylers attendance register of Calder Lodge No. 4564 which met by dispensation on Wednesday 23rd November 2016, to celebrate the 50th Anniversary in Freemasonry of WBro Anthony Fredrick Williams PProvSGD.

The Worshipful Master of Calder Lodge, WBro Alan C Towers, opened the Lodge and after concluding the preliminary business of the Lodge, received a report. The ProvAGDC, WBro Andrew D Taylor, was admitted and announced that WBro John R. Farrington PSGD, Assistant Provincial Grand Master for the Northern area of the Province of East Lancashire, was without and that he demanded admission.

WBro Farrington was then saluted in due form. WBro Farrington thanked the Brethren for their Salutations and said he was delighted to see so many Brethren in attendance and that he was looking forward to this special evening. Remarking that on the last 50th Anniversary Celebration he had attended, the Celebrant, who was travelling some distance, had been delayed by traffic and had only arrived in time for the Festive Board; it was therefore a relief to see WBro Williams in attendance as he had travelled from Selby in Yorkshire to be here tonight.

WBro Farrington introduced the Provincial and District Delegation, which included Provincial Officers of the year and Grand Officers, one of whom was WBro / EComp Paul Aspinall APGP who is a regular supporter of these events and who is standing down form that position in March next year. WBro Farrington wished WBro Aspinall every success in his “retirement”
WBro Farrington Then announced that the main business of the evening was to celebrate the Golden Jubilee of Anthony Fredrick Williams PProvSGD. WBro Williams was then placed in the centre of the Lodge.

WBro Farrington first passed on the very best wishes of the Right Worshipful Provincial Grand Master, Sir David Trippier, and those of the District Delegations, Grand Officers and all the Brethren present.

The Lodge Secretary, WBro Ian Allison, PProvSGD, informed the assembled Brethren that WBro Williams was initiated into Calder Lodge No. 4564 on the 23rd of November 1966 and proceeded to read extracts of the minutes of the meeting held on that date.
WBro Farrington then announced that at this point he would reflect on some of the events that took place in 1966, the year of WBro Williams’ Initiation. Having read out a series of both interesting and amusing facts WBro Farrington gave a resume of WBro Williams’ “Masonic Career”.

WBro Farrington came onto the floor of the Lodge and having received WBro Williams’ permission he read out both the Personal letter from the Right Worshipful Provincial Grand Master, Sir David Trippier, and the Certificate to commemorate WBro Williams’ “Golden Jubilee”

WBro Williams with WBro Farrington, the Worshipful Master and the Brethren of Calder Lodge

WBro Anthony Williams became the Fifth member of Calder Lodge to achieve Fifty years in Craft Freemasonry and it was most fitting that the other Four members of the “50 Club” were in attendance.

The Social Board was a happy and convivial gathering with all the Brethren in attendance clearly enjoying the occasion.
In proposing the toast to his health WBro Ian Williams, the brother of the birthday boy, who himself had celebrated his Golden Jubilee some two years previously gave an interesting and in depth account of Tony’s Masonic and professional life and the contribution that he has made to the community. It was clear from the account provided that WBro Williams well deserved all the accolades that had been afforded to him.