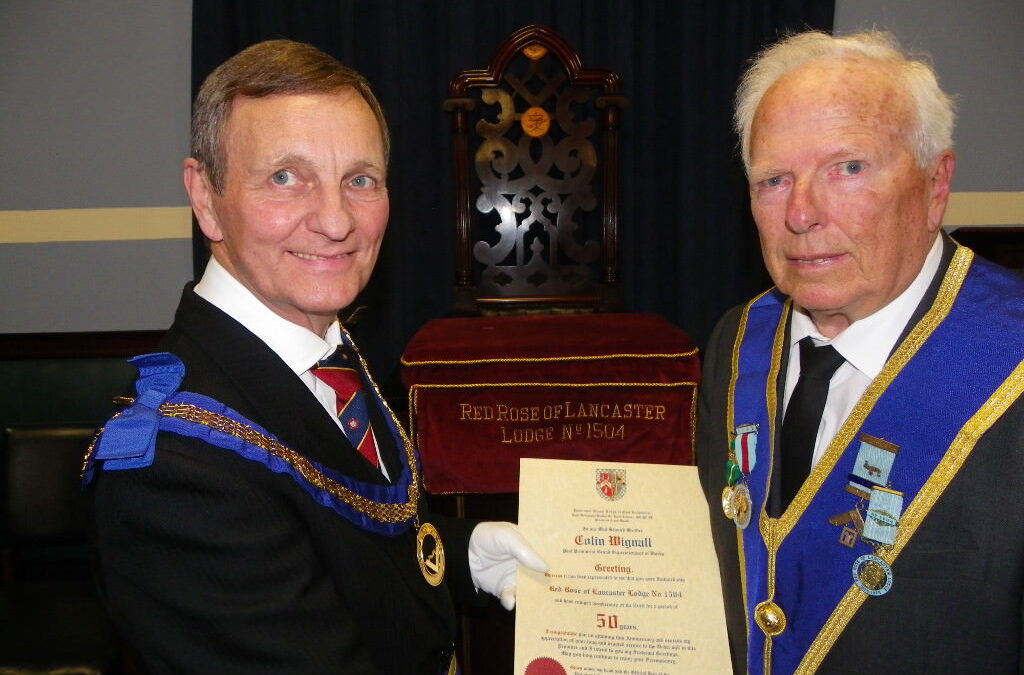 Forty-Nine Brethren, including WBro John R. Farrington, PSGD, The Assistant Provincial Grand Master for the Northern Area of the Province of East Lancashire, accompanied by Grand Officers, Provincial Officers of the year and a District Delegation, signed the Tylers attendance register of Red Rose of Lancaster Lodge 1504 on Thursday 6th April 2017, to celebrate the 50th Anniversary in Freemasonry of WBro. Colin Wignall, PProvGSuptWks.

WBro Colin Wignall with WBro Farrington, visitors and the Provincial and District delegations

The Worshipful Master of Red Rose of Lancaster Lodge, WBro Stanley Smith, opened the Lodge and after concluding the preliminary business of the Lodge, received a report. The ProvAGDC, WBro David Cowan, was admitted and announced that WBro John R. Farrington PSGD, Assistant Provincial Grand Master for the Northern area of the Province of East Lancashire, was without and that he demanded admission.
WBro Farrington was welcomed to the Lodge and was offered the Gavel by the Worshipful Master, WBro Stanley Smith. WBro Farrington replied saying it was always a great honour and a privilege to be offered the Gavel of a Lodge and that on this special occasion; he was pleased to accept it.
WBro Farrington, together with VWBro Dr Nigel G Bramley-Haworth, the Past Deputy Provincial Grand Master was then saluted in due form. WBro Farrington thanked the Brethren for their Salutations and said he was delighted to see so many Brethren in attendance and that he was looking forward to this special evening. Remarking that he was indeed fortunate to be able to attend such occasions especially so on this occasion as he had known WBro Wignall since he (WBro Farrington) had been initiated into Fedalis Lodge in 1978. Addressing WBro Wignall, WBro Farrington made reference to the number in the District and Provincial delegation stating that it showed the respect they have for these occasions and that WBro Wignall should appreciate “they are all here to support you”.
After introducing the Provincial and District Delegation, which included WBro/EComp Brian Carter who was in attendance in his new role as Assistant to the Provincial Grand Principles for the Northern Area. WBro Farrington hoped that WBro Carter would be able to attend more of these celebrations in the future. WBro Farrington went on to thank WBro/EComp Paul Aspinall, EComp Carter’s predecessor, who was also in attendance, for his support in the past.
WBro Farrington then announced that the main business of the evening was to celebrate the Golden Jubilee of WBro Colin Wignall, PProvGSuptWks. WBro Wignall was then placed in the centre of the Lodge.
WBro Farrington first offered the very best wishes of the Right Worshipful Provincial Grand Master, Sir David Trippier, and those of the District Delegations, Grand Officers and all the Brethren present.
The Lodge Secretary, WBro Stephen Williams, PProvSGD, informed the assembled Brethren that WBro Wignall was initiated into Red Rose of Lancaster Lodge No. 1504 on the 6th April1967 and proceeded to read extracts of the minutes of the meeting held on that date.
WBro Farrington then invited WBro Williams to address the meeting and he gave an excellent, well researched tribute, stating at the outset that at the age of 29, Colin became a member of Red Rose of Lancaster Lodge No. 1504, and tonight we, 50 years to the day, were celebrating the anniversary of that night.
WBro Williams concluded his tribute by saying “there is no doubt at all that his entire life has also been an example of what makes a good Freemason, as well as a good citizen, a good husband, a good parent and in every way, a contributor to society as a whole. There is also no doubt that during the last 50 years, anyone who happened to learn that he is a Freemason, could not fail to see him as anything other than a good ambassador for our order.
Colin, the members of Red Rose of Lancaster congratulate you, and look forward to many more years in your company”.
The tribute was very well received and WBro Williams was thanked for his preparatory work and delivery.
Following the tribute the Assistant Provincial Grand Master referred to events that had taken place during the year that WBro Wignall had been initiated. These brought back some happy memories.
WBro Farrington then presented the Certificate and personal letter from the Right Worshipful Provincial Grand Master and WBro Wignall was escorted around the Lodge to the acclaim of the Brethren. To conclude the formal proceedings a 50 year lapel badge, to be worn with pride, was presented by the District Chairman, WBro Paul Thornton.

WBro Wignall with WBro Farrington, the Worshipful Master and Brethren of Red Rose of Lancaster Lodge.

The Festive Board room was at capacity and the assembled Brethren enjoyed the usual excellent festive board provided by the Lodge, a very convivial occasion.
The Festive Board was ably managed by the Provincial Deputy Grand Director of Ceremonies and the usual toasts were respectfully honoured. In response to his health WBro Wignall thanked the Brethren for their support and good wishes, so generously expressed during the evening.
All in all a wonderful celebration of this memorable achievement of a popular and respected friend and Freemason.