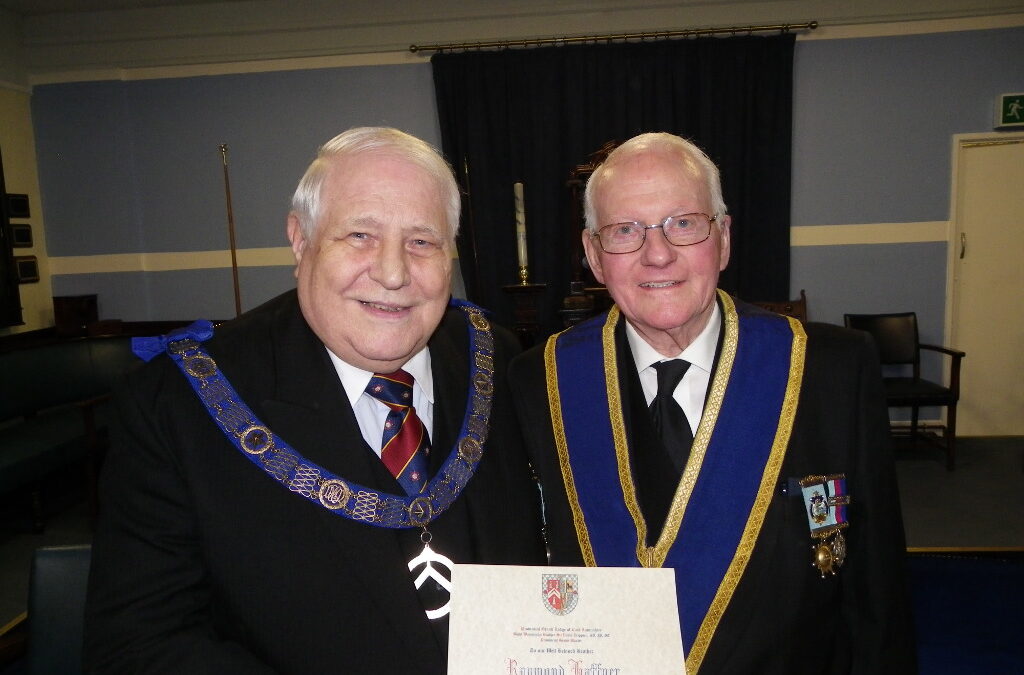 Over 50 Brethren, including VWBro Derek Nelson Thornhill, JP, PGSwdB, the Deputy Grand Master for the Masonic Province of East Lancashire and WBro John R. Farrington, PSGD, The Assistant Provincial Grand Master for the Northern Area of the Province of East Lancashire, accompanied by Grand Officers, Provincial Officers of the year and a District Delegation, signed the Tylers attendance register of Calder Lodge 4564 on Wednesday 20th December 2017, to celebrate the 60th Anniversary in Freemasonry of WBro. Raymond Haffner, PProvSGW

The Worshipful Master of Calder Lodge, Bro Christopher W Swindells, opened the Lodge and after concluding the preliminary business received a report. The ProvDepGDC, WBro Andrew Taylor, was admitted and announced that VWBro Derek Nelson Thornhill, PGSwdB, JP, accompanied by WBro John R. Farrington PSGD, Assistant Provincial Grand Master for the Northern area and WBro Robert Allan, PProvGSuptWks, Deputy District Chairman for Burnley and Pendle District, was without and that he demanded admission.
The Brethren stood to order as VWBro Thornhill, WBro Farrington and WBro Allan were welcomed into the Lodge. VWBro Thornhill was offered the Gavel by the Worshipful Master. VWBro Thornhill replied saying it was always a great honour and a privilege to be offered the Gavel of a Lodge and that on this special occasion he was pleased to accept it.
VWBro Thornhill was then saluted in due form. VWBro Thornhill thanked the Brethren for their fraternal Salutations on behalf of himself and WBro Farrington and said he was very pleased to see so many Brethren in attendance and that he was looking forward to this special evening.
After introducing the Provincial and District Delegation, VWBro Thornhill announced that the main business of the evening was to celebrate the Diamond Jubilee of WBro Raymond Haffner, PProvSGW, which was a most important milestone in WBro Haffner’s life in Freemasonry. WBro Haffner was then placed in the centre of the Lodge by the Provincial Deputy Grand Director of Ceremonies.
VWBro Thornhill then called on the Lodge Secretary, WBro Ian Allison, PProvSGD, to read the minutes of the meeting held on the 18th December 2017, when WBro Haffner celebrated his Golden Jubilee in Freemasonry.
Following the reading of those minutes, VWBro Thornhill invited WBro William Entwistle, PProvSGD, to deliver a tribute to WBro Haffner.
WBro Entwistle started by saying that he and WBro Haffner were both born in Cliviger a few months apart and had been friends since childhood; as such he was probably most qualified person present to deliver this tribute.
WBro Entwistle delivered a heartfelt and at times, emotional tribute to his friend of some eighty-four years, touching on their love of Caving and Climbing, their service in the Armed Forces, where he had served in the Fleet Air Arm and WBro Haffner in 40 Commando, Royal Marines. WBro Entwistle went on to say that his life-long friend had given unstinted service to many orders in Freemasonry over the years and his strength of character, his honesty and his fortitude was responsible for many Brethren joining our order.
VWBro Thornhill outlined to the Brethren present the service WBro Haffner had given to his Lodge and the Province in many offices over the last sixty years. Initiated on the 18th December 1957, WBro Haffner was Installed as Worshipful Master in 1969 and had served in many offices Including seventeen years as lodge Almoner. In the Province WBro Haffner was appointed to PProvDepGStdB in 1989 eventually achieving the rank of PProvSGW in November 2017.
In the Royal Arch EComp Haffner was Exalted in the Red Rose of Lancaster Chapter, 1504 in 1972 and achieved the rank of PProvGStdB
VWBro Thornhill then referred to some of the significant events and other interesting facts relating to the year 1957, the year WBro Haffner was initiated.
VWBro Thornhill then, with the permission of the celebrant, read the personal letter and illuminated certificate from the Right Worshipful Provincial Grand Master and presented them to WBro Haffner, who was then escorted around the Lodge by the Provincial Deputy Grand Director of Ceremonies to the acclaim of the Brethren. To conclude the formal proceedings a 60 years lapel badge, to be worn with pride, was presented by the Deputy District Chairman, WBro Robert Allan.

Following the Alms collection, VWBro Thornhill thanked all that had been involved in the evenings celebration.
The Provincial Deputy Grand Director of Ceremonies then asked if VWBro Thornhill wished to retire accompanied by WBro Farrington and WBro Robert Allan, and on this occasion WBro Haffner. VWBro Thornhill having given his assent, a retiral procession was formed and the Deputy Provincial Grand Master, accompanied by WBro Farrington, WBro Allan and WBro Haffner retired to the acclaim of the Brethren.

The social board was, as always on these occasions, a happy and convivial affair. Toasts were sincerely given and appropriately honoured and the highlight was the response given, by WBro Haffner, without notes, to the toast to his health. It was well received and demonstrated the esteem in which Raymond is held by all that were in attendance.
Report by John Wilkinson