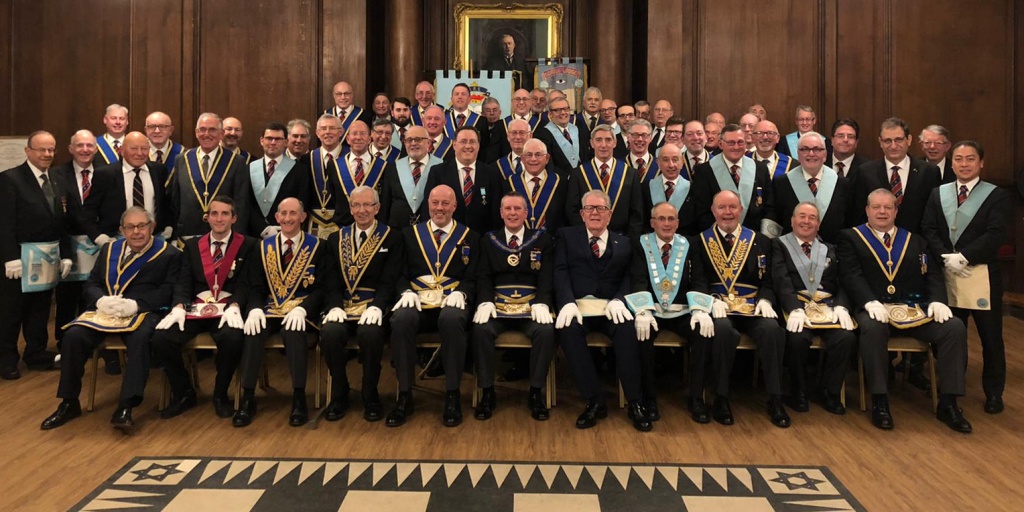 The evening of 11th February 2020 was not only a very special for Bro Charles Frieze but also for the members of Arkscroll Lodge, Ladies and other non masonic guests.

After the Lodge was opened and the minutes confirmed, WBro John Curry, the Deputy Provincial Grand Director of Ceremonies was admitted and announced that Worshipful Bro Mark Davis, Assistant Provincial Grand Master for the Manchester Area, accompanied by a District Deputation was outside and that he demanded admission.

Shortly after, the Lodge was called off in order that Charles’ Wife Charmian, Family and non-masonic guests could be invited into the Lodge room.

Bro Charles Frieze was initiated into Scroll Lodge No 6594 in the Province of East Lancashire in December 1969.

WBro Mark Davis delivered a very warm tribute to Charles highlighting not only the contributions he has made to the Province of East Lancashire and Freemasonry in general, but also to his life outside the Craft.

Charles trained as a Chartered Accountant a position he worked in for many years, where Charles worked without charge to several UK Charities, Charles was also Treasurer of The Manchester Chamber Concerts Society, a registered charity, which is the region’s leading provider of chamber music, bringing groups of international stature to deliver a series of winter-month concerts, contributing to the funding of The Royal Northern College of Music.

Charles became a governor of The Kingsway School in Cheadle, which, at the time was a State Comprehensive teaching ages 11 to 16. He was a governor for 30 years until 2016, and Chair of Finance for 20 years.

In concluding his tribute WBro Davis stated that “This brief history aptly demonstrates the qualities of a true Freemason by his devotion and support to his family and his continued service to the wider community of which he should be justly proud”.

WBro Davis then came on to the floor to read out and present Charles with his illuminated Certificate from the Province to mark this special landmark in Freemasonry.

The Manchester Derby District Chairman WBro Paul O’Carroll then gave his own warm tribute and presented Charles with a 50 Year Lapel Pin on behalf of Manchester Masons congratulating him on his momentous achievement.

In conclusion of the celebration in the Lodge room, WBro Davis requested that the Deputy Provincial Grand Director of Ceremonies John Curry perambulate Charles around the Lodge room to spontaneous applause.

After the Lodge was closed, the members hosted a warm and very enjoyable Social Board, during which WBro David Basger paid tribute to Charles who responded to the delight of all present which was well received by Masons and Guests alike.