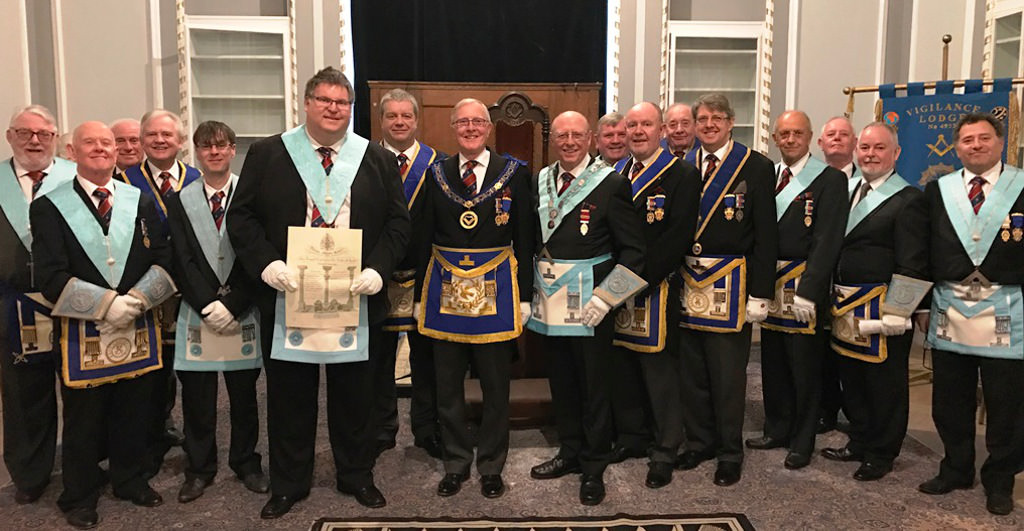 On the 4 April 2017, WBro Christopher Welton PSGD, Assistant Provincial Grand Master, and a delegation from the City Sykes District, had the privilege to attend Vigilance Lodge No 4952 at Manchester Hall.
Once the lodge was opened, WBro Welton and his District Delegation were received into the lodge. The Worshipful Master of Vigilance Lodge, Bro John Wilkinson, offered the gavel to WBro Welton but he declined it on this occasion. Having expressed his delight to visit the lodge, WBro Welton then went on to introduce his District Delegation, which consisted of :
WBro Christopher Prax PProvJGW, City Sykes District Chairman; WBro Christopher Wildman ProvGSuptWks, District Secretary; WBro John Winstanley PProvJGW, Royal Arch District Officer; WBro Roy Chapman PProvDepGDC, District Mentor; WBro Gordon Desser PProvGSuptWks, TLC Representative; WBro Richard Zoltie, District Communications Officer; and Bro Chris Armstrong, District Assistant Communications Officer.
WBro Chris Welton then took great pleasure in presenting Bro Christopher John Hughes with his Grand Lodge Certificate, once an exceptionally thorough explanation of it had been delivered by WBro Arthur D Spray, PProvDepGSwdB.
At this point, WBro John Winstanley, Royal Arch District Officer, gave a short explanation of the role of the Royal Arch in Freemasonry and delivered a personal letter to him from the Provincial Grand Superintendent, Sir David Trippier, requesting that he consider joining once he felt it was the right time in his Masonic journey.
The Lodge was then opened in the Second Degree and WBro Roy Cook PProvGSwdB delivered an excellent explanation of the Second Degree Tracing Board.
A notice of motion was then passed for the Lodge to donate £500 to the East Lancashire Masonic Charity (ELMC). The Worshipful Master, Bro John Wilkinson, presented the cheque to WBro Welton, who received it on behalf of the ELMC with much thanks, praising them for their generosity.
The Lodge was then closed and everyone thoroughly enjoyed the social board that followed afterwards. The Worshipful Master, Bro John Wilkinson, luckily managed to pull his own ticket for the raffle draw and generously offered to have it redrawn, this time by WBro Welton. On the second time, WBro Wildman was the lucky winner of a fine bottle of Single Malt Whisky.