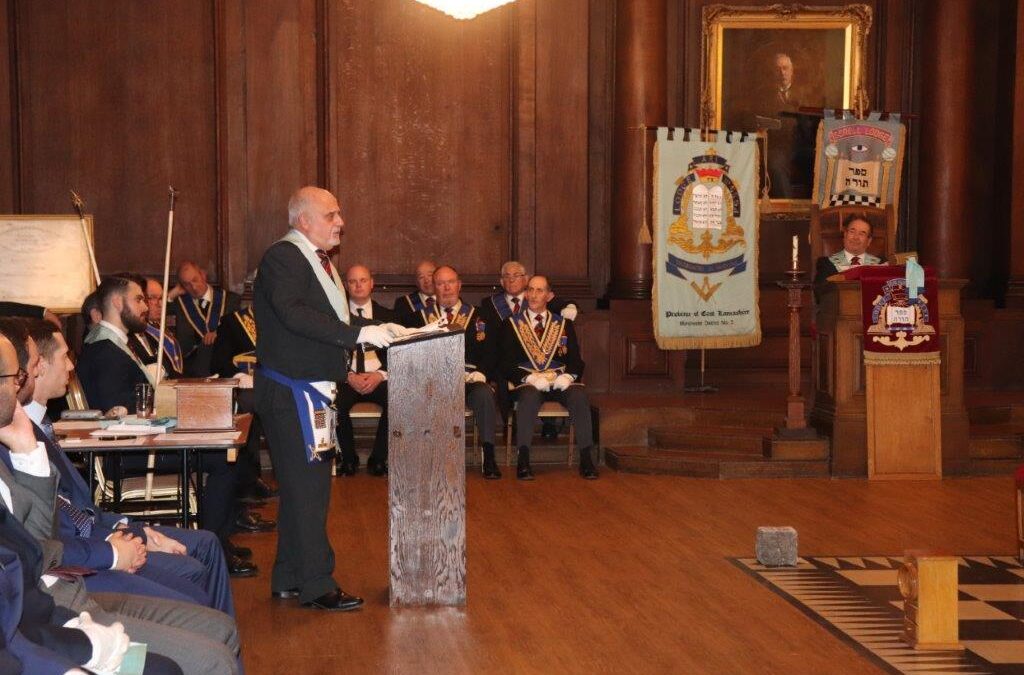 On Thursday 4th October, after its regular meeting, Arkscroll Lodge hosted a White Table evening.
After the lodge was closed, 39 non-masons were invited into the lodge room where they were warmly welcomed by the brethren. The WM, WBro Elliot Moss gave a short introductory talk to them pointing out the officers of the Lodge and then introduced WBro Jonathan Berg, the Lodge DC. WBro Berg gave a short and interesting talk to the visitors explaining the lay-out of the lodge room and the aims and objects of Freemasonry. In particular, he mentioned the three principles on which the order was founded, stressing the importance of relief – Charity.
WBro Oliver Basger, being one of the younger members of the Lodge, then spoke most enthusiastically about his membership of the lodge and the enjoyment he has had since becoming a member and rising through the ranks, culminating in his experience as Master of the Lodge.
The District Chairman, WBro David Hudson also spoke in the lodge room giving more information concerning Manchester Freemasonry and where it sits within the Province of East Lancashire and ultimately within the United Grand Lodge of England.
50 brethren and the non-masons enjoyed a cheerful and happy Social Board in the Goulburn Suite.
The evening provided the opportunity to showcase the typical atmosphere at a Social Board for prospective members for Arkscroll and a number of gentlemen who had recently made enquiries through Manchester Masons Social Media channels and subsequently been interviewed with a view to joining other Manchester Lodges.
The traditional toast to the visiting Brethren was extended to include the non-Masonic guests with Mr Richard Akka responding on their behalf.
All those in attendance considered it to be a very successful evening.