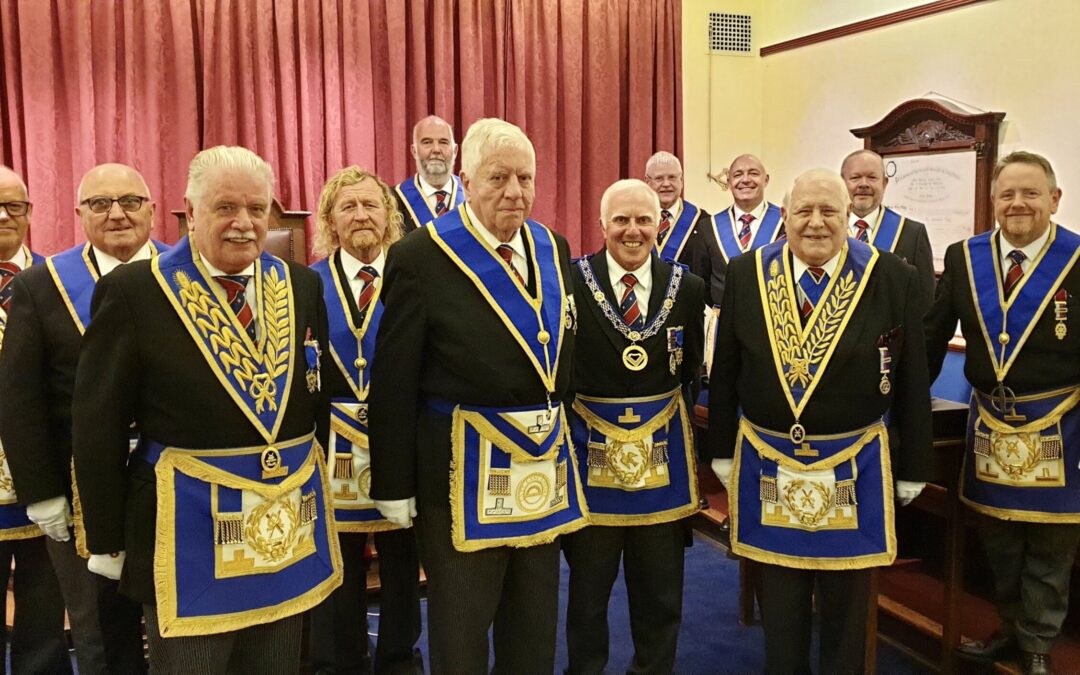 The 10th September was the first time back to Freemasonry for many who attended the delayed 50th Celebration of WBro Bryan Pemberton of Victory Lodge No. 3932 at Blackburn Masonic Hall, and what a wonderful occasion it was to relaunch after a very long break.

The 40 Brethren assembled were delighted to see each other in person and this led to a joyous event for Bryan, who had waited 18 months for this evening.

Following the business of the Lodge, Andrew Taylor as the Provincial Deputy DC led in a District Delegation headed by the Assistant Provincial Grand Master, Alan Kirwillian into the Lodge and after taking the chair from Worshipful Master Jon Moxon, the celebration began with Lodge Secretary John Rimmer reading the minutes from Bryan’s Initiation meeting on the 13th September 1970.

Peter Book then delivered his sincere and often emotional tribute to Bryan, this included details of his early working life, his time in the National Service and his extensive work in the Police Force. The full transcript can be seen HERE.

As is the tradition for events such as this, the APGM highlighted events that took place in 1970. These included the immortal line ‘Houston we Have a Problem’ as well as reminding the Brethren of the cost of everyday items, he concluded with an impromptu quiz on the pop stars of the time. Alan then presented Bryan with his Illuminated Certificate and letter from the The Right Worshipful Provincial Grand Master Sir David Trippier, following which Bryan was perambulated around the Lodge to the rapturous applause of the Brethren. Before the delegation departed, District Chairman Dave McGurty presented Bryan with an extra token of appreciation and thanked him for all the hard work he has put into Victory Lodge and the District in general.

The festive board was wonderful with everyone enjoying each other’s company and partaking in a first rate meal. In his response Alan Kirwillian was brief but very sincere in his delight that it was so wonderful to get back to face to face meetings. Peter Book proposed the toast to Bryan after relating a few amusing tales related to their friendship over the years. Bryan’s response was centred around what Freemasonry means to different people and how over the various ceremonies it all starts coming clearer as each individual Brother takes different experiences from their Masonic journey.

The Brethren left happy, well fed and importantly, reassured at face to face meetings. We look forward to Bryan’s 60th celebration, after all he is already 18 months closer to the date!

It was really great to be #TogetherAgainEastLancs