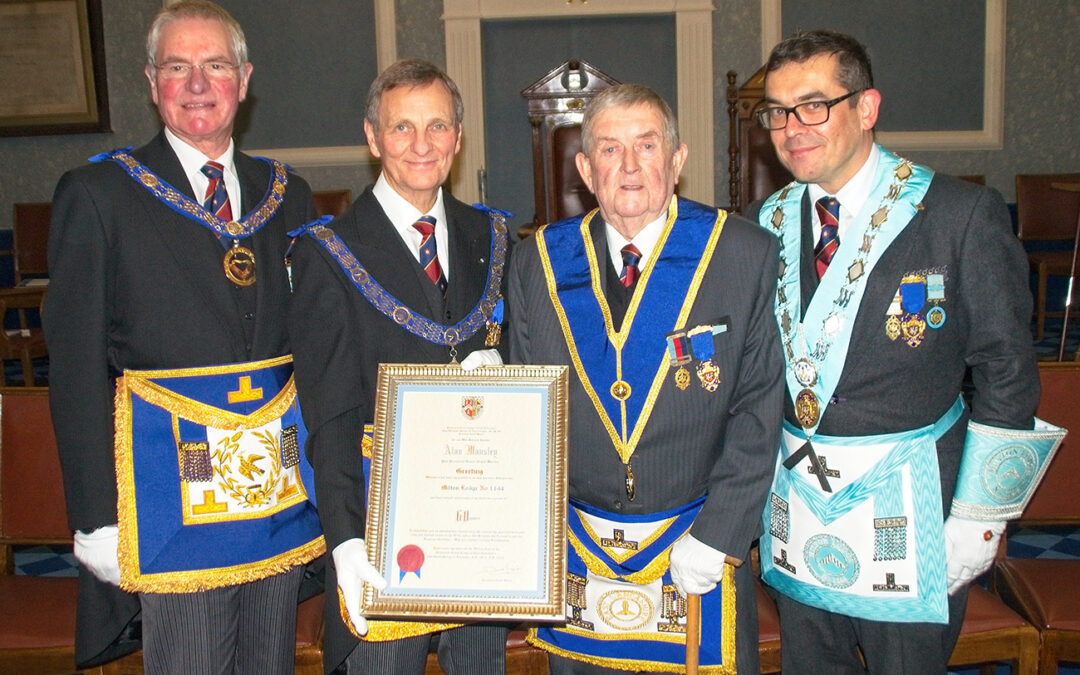 On Thursday 13th December 2018 some 50 members of our Masonic Fraternity came together at Milton Lodge’s December Meeting to celebrate the 60th Anniversary of WBro Alan Mansley’s Initiation into Milton Lodge back in November 1958. In order to help us to celebrate this event properly we were joined by WBro John Farrington PSGD, our recently appointed Deputy Provincial Grand Master, by our APGM, WBro John Pearson, by the Provincial Grand Wardens and the Provincial Sword Bearer as well as several other Acting Officers of the Province. They made a fine spectacle as they were paraded into the Lodge.

Members of Milton Lodge and the Provincial Delegation

Once the Lodge had settled down and we had given the Deputy Provincial Grand Master the honours due to his office, the Worshipful Master of Milton Lodge, Alex Miller, offered the Lodge’s gavel to WBro Farrington, and on this occasion it was, of course, accepted. The Secretary read the Minutes of the meeting at which Alan Mansley became a Freemason, and the Lodge’s DC, WBro Ian Walvin told us some stories of the many years during which it was Alan Mansley who carried the DC’s wand.
Then we were read a tribute. The Provincial Grand Secretary, Martin Roche, is, as most of us know, a wordsmith of remarkable ability. He writes plays and shows for the theatre and he critiques those written by others. He is also a member of Milton Lodge and I have no doubt that he considers Alan Mansley a personal friend, for the tribute that he had written, and which John Farrington delivered was as fine a piece of writing as I have heard this year.

Alan is the longest serving and most senior member of Milton Lodge and what you see and hear is what you get. He is, to use an oft overworked phrase, the salt of the earth, as honest and conscientious as the day is long. Alan is affable, to everyone, both to Lodge members that he has known for years as much as to visiting brethren who he has met for the very first time. He was the Lodge’s DC for many years and he was unobtrusive, but always there, and he could never stand anything that was not up to par. An exceptional man and a Mason.
Afterwards, WBro Farrington presented WBro Mansley with an illuminated certificate from the Provincial Grand Master, Sir David Trippier, celebrating his special anniversary. The District Chairman, Peter Douthwaite, presented him with a very special lapel pin and Alan was paraded around the Lodge Room to the acclaim of the members, visitors and guests. Then we all repaired to the Dining Room where we enjoyed a wonderful meal and a very special cake!

Congratulations, Alan, and may you have a long and very happy life in which to continue enjoying your Masonry.

The text of this article and all photographs shown as part of the article or held on another
associated site are ©Kevin Hall. District Communications Officer for Ashton & Mossley.

Neither text nor photographs can be used for any commercial purpose without the express written permission of the copy copyright holder.