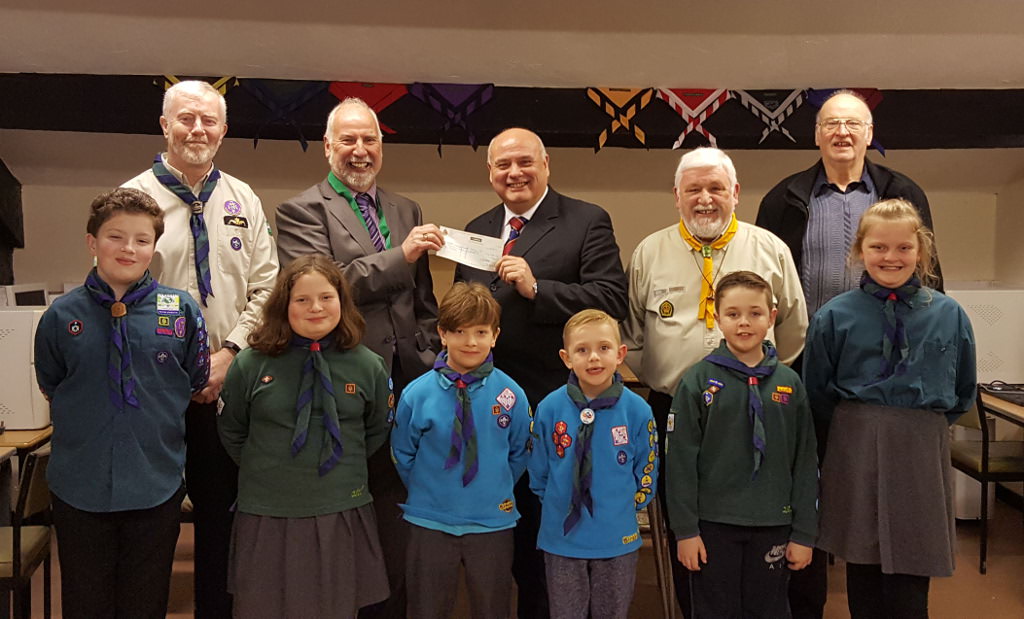 In the last few weeks our Bury District Charity Steward, Steve Holland, has been hard at work presenting donations to the total value of some £8500 to three worthy recipients.
Just under £5000 was presented to the Ashworth Valley Scout Camp on Wednesday 22nd March 2017. The donation was to fund the fitting of a heating system in one of the camping buildings on the site. Stuart Ashworth, who is a volunteer at the site, submitted the application on their behalf. When the heating is fitted they will put a plaque up acknowledging the assistance from the ELMC
The back row, from left to right, are Ian Moriarty (volunteer), John Carney (Chairman), Steve Holland, Doug Sutton (Camp Warden) and Stuart Ashworth who is a volunteer at the site. The front row are kids from the 12th Heywood Scout Group, one of the many groups of children from Bury and Rochdale that benefit from the excellent facilities provided at the camp.

Steve then attended Tottington Park Bowling Club where he presented a cheque for £2000 to fund a new kitchen in their clubhouse. The application was made by Geoff Leach shown 2nd from the right. The rest of the collective are, from left to right;
Bill Roskel, Bill Shaw, Eddie Pearson receiving cheque, Geoff Capper, Secretary Les Morris, Chairman Geoff Leach, John Stansfield.

Finally Steve dropped in on the North West Blood Bikes. The N.W.B.B. assist the hospitals in the North West and Lakes delivering vital blood, donations, hospital records and anything else required during the hours of 1900 and 0200 during the week and 24hrs on Saturday and Sunday. Their work is vital to the running of these hospitals during the ‘out of hours’ periods. Steve presented a cheque to Graham Miller, the secretary for £1500 to purchase essential safety equipment for the riders. Also pictured is the Chairman Paul Brooks. The application was made by Ed Beaman.
This is just a sample of the work that the District Charity Stewards perform throughout the year, presenting cheques from the ELMC, Grand Lodge Charities and others.
This is a shining example of the good work performed in the local communities by and on behalf of Bury District Masons and the fraternity as a whole. Well done to all.