Colne Lodge’s 100th anniversary celebration took place on the 23rd of May 2022 at its 925th Lodge meeting, with WBro Robert Bevridge, PProvSGD, in the chair.

The Lodge tyled at the earlier time of 6.00 pm to ensure they had time to enjoy both the Lodge proceedings and the celebrations in the social board.

The Lodge room slowly filled as seat after seat was taken by Lodge members, visitors, and guests, a total of 52 Brethren in attendance. It had been a long time since Colne Masonic Hall was filled with East Lancashire Freemasons. With the Brethren fully assembled, the Worshipful Master opened the Lodge and received the Deputy Provincial Grand Master, VWBro John R Farrington, PGSwdB, accompanied by a deputation of Provincial Officers. On this celebratory occasion the Deputy Provincial Grand Master accepted the gavel from the Worshipful Master and proceeded to conduct the meeting.

WBro Gerald Hollos, PProvJGD, the Lodge Secretary, was invited to present a history of the Lodge over the 100 years of its existence.

Colne Lodge was consecrated on the 18th of May 1922 and the consecration ceremony took place in the Municipal Hall in Colne.

Colne Lodge is a daughter Lodge of Royal Lancashire Lodge No 116 and its birth as a new Lodge started at Royal Lancashire’s regular Lodge meeting on the 13th of March 1921. The initiation fee at the foundation of the Lodge was £20 with an annual subscription of £5.5.0d

Colne Lodge was so successful attracting members that on one occasion in 1923 a candidate was initiated, and a brother raised, all on the same evening.

In 1946 the secretary reported that the Lodge had 84 members, initiating the need for a daughter Lodge, and so Noyna Lodge No. 6447 was born.

In all the Lodge has 4 minute books filled with interesting History of its existence.

Finally, the Centenary Warrant was presented to the Lodge by the Deputy Provincial Grand Master followed by an address congratulating the Lodge and its members past and present on attaining the 100-year milestone. The Worshipful Master, Robert Bevridge, took this opportunity to present a cheque from the Lodge in aid of the 2026 Festival.

On occasions such as this, a promotion is usually presented to a long serving Brother in the Lodge, and on this evening the Deputy Provincial Grand Master, VWBro John R Farrington, promoted WBro Bill Ainsworth to the office of Past Provincial Junior Grand Warden. Bill, and the Brethren alike, were overjoyed, as he Sojourned around the Lodge to the applause of all the Brethren. A very special moment indeed. 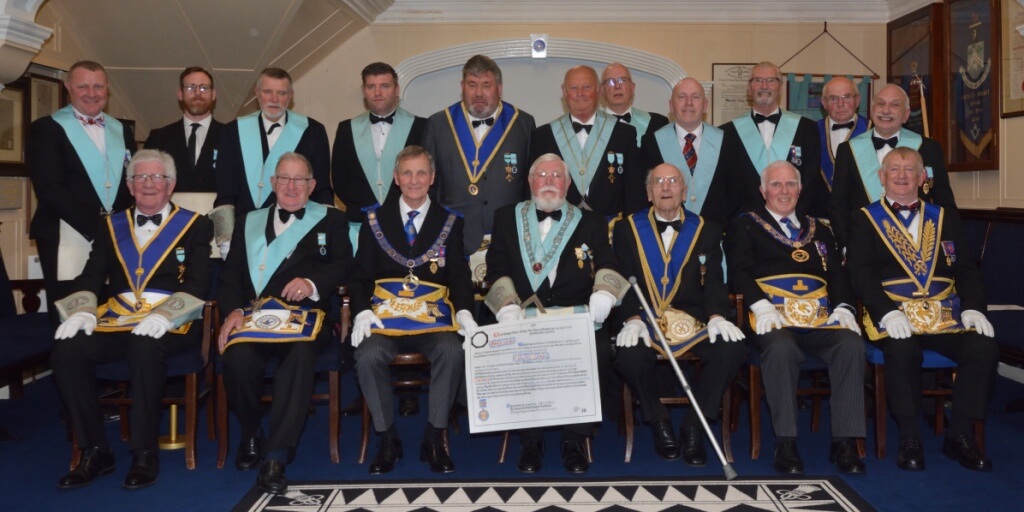