On 25th March, over 30 Brethren assembled at Radcliffe Masonic Hall for a double celebration of 50 years in Freemasonry for WBro Eric Reeves ‘Master in the Chair’ and WBro James Garner, both members of The Pythagoras Lodge of Installed Masters No. 9248.

Once the opening business had been conducted the Lodge welcomed, Assistant Provincial Grand Master, WBro Alan Kirwilliam, who kindly took the gavel from the Worshipful Master, WBro Eric Reeves, and began the celebration proper.

The Lodge was ‘Called Off’ and both Eric and Jim’s sons entered as specially invited guests.

Celebrants, APGM, Grand Officers & the Celebrants sons
A heartfelt, humorous and well-received tribute was given by the Lodge Mentor and raconteur WBro Jeremy Aston to both celebrant’s, which was very much enjoyed by all the Brethren and guests alike. A few gems from their lives were revealed-that Jim was a very talented saxophone player and had been part of the backing band for Elke Brooks, and Eric had been the band manager of Herman’s Hermits.

The minutes of the meeting from the Lodge of Good Fellowship in Dukinfield (the Province of Cheshire,) where Eric was initiated on the 7th of May 1971, were read by the Lodge Acting Secretary WBro Cliff Jewell. Jim was initiated into Fairway Lodge, Salford on the 4th November 1971. Both Jim and Eric were then asked to reminisce on their Initiation Ceremonies and spoke fondly about their lives in Freemasonry.

Alan Kirwilliam then went on to highlight some of the things that had happened in 1972 in terms of politics, art and culture and the cost of items at the time, including a new Mini costing £650 and the average house price being £5500! It was an interesting time for the country as decimalisation began in February 1971 and B O A C became British Airways. It was also shared that, at this time, 68% of men smoked cigarettes.

After presenting Eric and Jim with their certificates and personal letters from The Deputy Provincial Grand Master in Charge, VWBro John Farrington, both celebrants were perambulated around the Lodge to the acclaim of the Brethren.

The Celebration concluded with Eric and Jim being presented their lapel badges by WBro Howard Berry, representing the Bury District Chairman, as a token of the contribution they had made over the last 50 years.

The guests retired from the Lodge room and the meeting was ‘Called On’. The APGM retired accompanied by both Celebrants.

The Lodge was then closed in the usual manner.

The Festive Board was a wonderful occasion, supported by over 80 masons, families, and guests. The theme was a 1950’s street party, with a menu from 1952, when the Queen’s accession took place. The street party idea came from Eric Reeves, and he was well-supported in organising the event by Gerry Russell, Jeremy Aston, Stephen Sharp and WBro Sharp’s wife Janette, who kindly organised the decorating of the room.

The APGM, Alan Kirwiliam, Roger (Tiger) Bowden and guests enjoying the Jubilee Party
WBro Gerry Russell was a fantastic MC, and he also ran a variety of fun fundraising activities during the evening. These were enhanced by a film show of events from the 1950’s onwards, music and singing ‘Last Night of the Proms’ style. All guests were treated to individual place mats set on 1950’s copies of the Manchester Evening News.

The Street Party in full voice, singing Last Night at the Proms

Jeremy Aston & Stephen Sharp sharing a joke in the vibrant atmosphere
The whole evening was a complete success from start to finish. The icing on the cake was the magnificent sum of £1270 raised by the Brethren and guests, with all the monies being donated to the 2026 East Lancashire Festival Appeal. 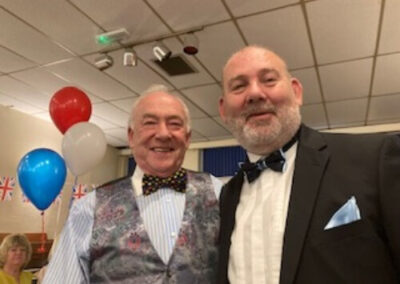 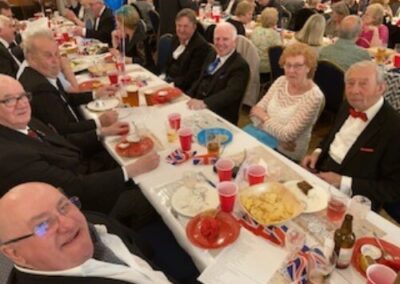 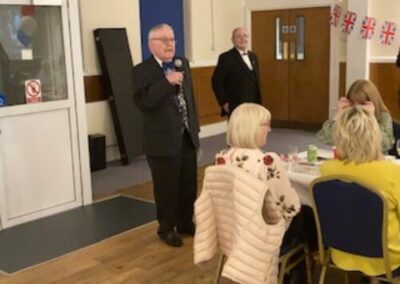 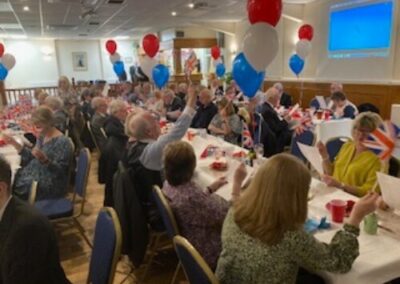 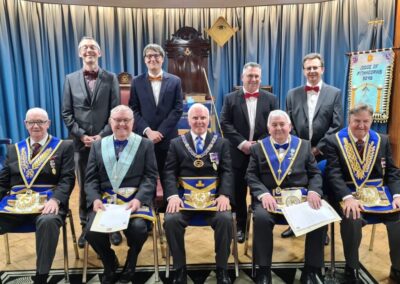