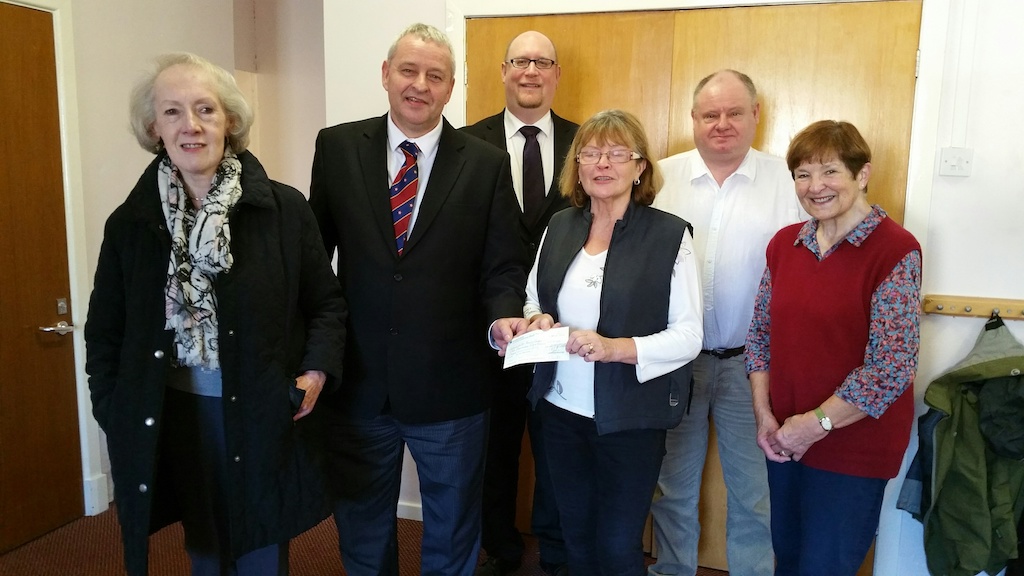 East Ribble Charity Stewards’ Fund have presented a cheque to help keep gardening tools safe at a cemetery.
Bro John Gosling, a resident of Hoddlesden, had requested a grant on behalf of the village’s Friends of St Paul’s Cemetery, to purchase security gates for their storage container, which had been broken into, resulting in all their gardening equipment being stolen.
Luckily, the equipment was insured and was able to be replaced. Bro Gosling sought help from WBro Mike Stubbs, District Charity Steward. The proposal was presented at the Charity Stewards meeting where it was unanimously decided to give them £150.
We arrived in Hoddlesden at 10.00 a.m. on the Saturday morning.  The temperature in the car was reading -3 deg.  We were met by brother Gosling in his shirt sleeves (they are obviously a hardy bunch in Hoddlesden!!). We were conducted to the community centre, formerly the Conservative club, where we were greeted by a very warm welcome from some of the Friends of St Paul’s, who hold fundraising coffee mornings on Saturdays. We were immediately offered tea, coffee, toast and biscuits and had a wonderful time learning about the history of the village and cemetery.
The cemetery dates back to the early 1500’s and has 18 war graves from the two World Wars, including the names of some servicemen who died overseas and who have been added to family graves. Each Remembrance Sunday, local school children place poppies on the graves. Being in a poor state of repair, the church was beyond saving. The ladies laughed as they told us it needed three attempts to demolish it with dynamite!
Among the ladies who look after the cemetery, one is 92 years of age and lives above Hoddlesden and walks down and another is 83 and walks up. We presented the cheque to the Friends, which was gratefully received, so much that they sent out an open invitation to any Masons in the area to join them for refreshments at future coffee mornings.