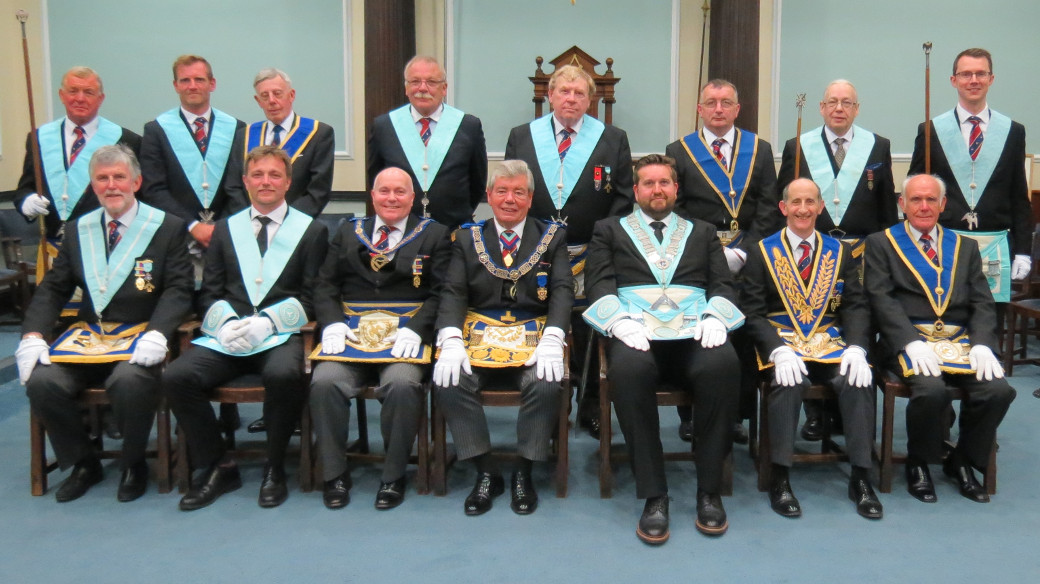 On Monday the 8th May, Arcturus Lodge, No.7252, played host to the RW Provincial Grand Master, Sir David Trippier, RD, JP, DL, a Provincial Deputation, members of the District team and Masons from across the Province. They were all there to see the Education and Development Committee Demonstration Team give an explanation of the 1st Degree Ceremony. They were ably assisted by members of Arcturus Lodge, in particular Junior Deacon Bro Graeme Potts who acted as the Candidate for the evening.

Sir David Trippier with the Provincial Delegation, Grand Lodge Officers and the WM and members of Arcturus Lodge.

The evening commenced in the usual manner and after the initial business of the Lodge being completed there was a report and WBro John Griffin ProvGDC was admitted and announced that the RWProvGM Sir David Trippier was without and demanded admission. The Provincial Deputation and Grand Lodge officers were admitted, followed by Sir David Trippier. After the usual honours and salutations the WM of Arcturus Lodge, WBro Adam Tarling, offered Sir David the gavel.  On this occasion it was accepted and Sir David occupied the Chair of KS. The next business on the summons was the Explanation of the 1st degree Ceremony by the Demonstration Team.  With WBro David Hudson, ProvSGW, installed in the chair of the SW and WBro Terry Kakoulis, ProvJGW, in the chair of the JW, the explanation was given by WBro Elliot Moss PProvDepGR and WBro Joe Glass PProvJGW. An excellent ceremony was given, well worth a visit if you get the opportunity to see it. Many of the Masons present, both new and old commented that they learnt something from the demonstration given by the Education and Development Team. Recent surveys have shown that new Freemasons have a hunger for Masonic knowledge and understanding that all Lodges should aim to satisfy and one of the ways this can be done is with support from the Province’s Mentoring Team and the Education and Development Committee (see the Provincial website for details).
At the Social board, with members of Robert Burns Chapter joining us, over 60 guests enjoyed a great evening of good food, conviviality and laughter, with Sir David on great form.  Sir David commented on the work that had been done to prepare Hemsley House for the forthcoming Open Days and during the Social Board took time to meet some of the newer brethren, including Entered Apprentices. The evening ending promptly at 10:00 clock with Sir David retiring from the Social Board and wishing all present a safe journey home.