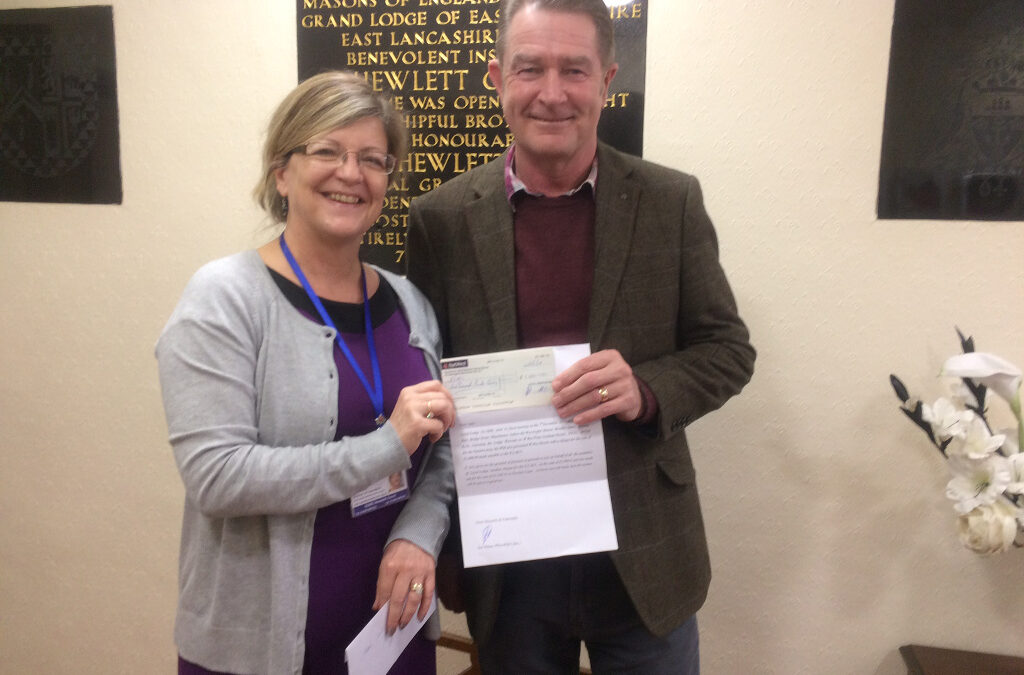 On Thursday the 7th December 2017 Loyal Lodge No 5040, a Lodge meeting at Bridge Street since 1928, held its final meeting before handing back the Lodge Warrant.
At the meeting on the 7th December 2017, the Worshipful Master made a donation of £1,000.00 to the ELMC and in late December Loyal Lodge members made a donation of £500.00 to the Joshua Lancaster Foundation.
The latest donations being made at Hewlett Court on the 26th January 2018, by WBro Jim Hilton the last Secretary of Loyal Lodge, who presented two cheques to Mrs Julie Ward the Director of Operations at Hewlett Court, the first donation was for the sum of £1,000.00 and made payable to the ELMC, the second cheque was for the sum of £1,240.31 and made payable to Hewlett Court.
Hewlett Court is a self-funding organisation and only receives funding from the ELMC when they need it, so it is very gratifying that a small Lodge with only 12 members were able to assist them.
Since the members of Loyal Lodge installed Bro James A Kelly as their final serving Worshipful Master in December 2016, they have donated over £5,040.00 to Masonic and local charities and good causes the last of those being made to Mrs Julie Ward on the 26th January.
And finally a thank you to W Bro John Robert Gore, Secretary of Loyal Lodge for 33 years who sadly passed away in hospital on the 12th December 2017, RIP John.
The picture above shows Julie Ward receiving cheques from WBro Jim Hilton
Prepared by James Hilton