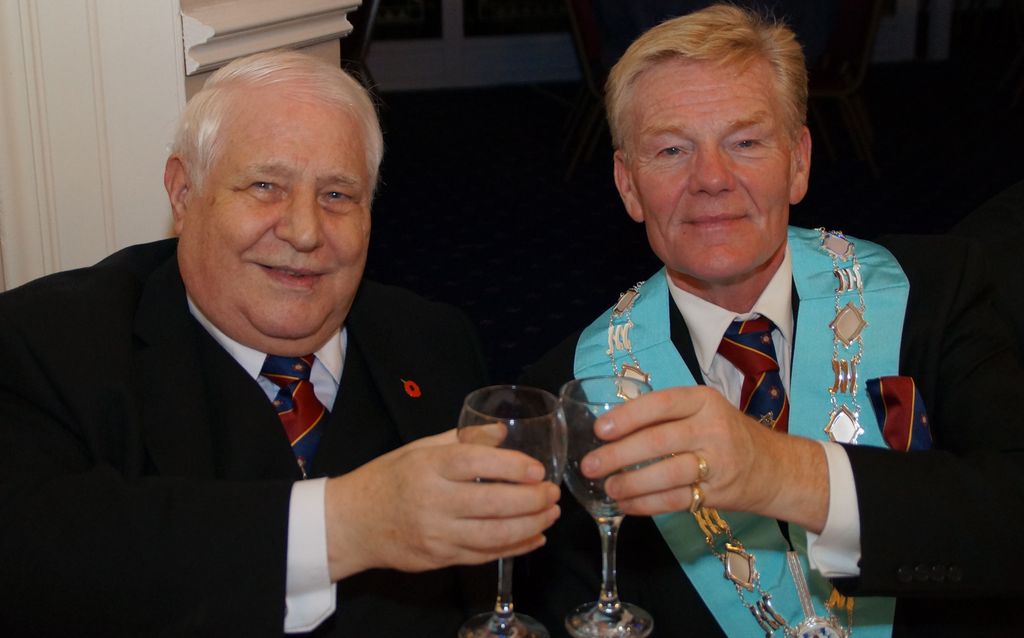 WBro Peter Cole, the Lodge Mentor, then read a History of Milton Lodge which you will find as an attachment to this article. It is a very interesting read and I commend it to you. I won’t dwell on that history here, suffice it to say that this is a Lodge that was consecrated at the Burlington Hotel in Ashton by the Provincial Grand Master, Stephen Blair in March 1867. It was one of the founder Lodges of Ashton Masonic Hall in the early 1920’s, lost two of its Brethren in War, one at Gallipoli and the other in the Second World War. It has provided Ashton under Lyne with two Mayors and had a membership that grew to over 100 in the post war years. But the most compelling thing comes with the words with which WBro Cole concluded, the simple fact that this is a history, “of ordinary men doing ordinary things and transferring the tenets of freemasonry into their everyday lives, lives that spanned many a trade, and thereby made the world a better place.”

WBro Sterling, WM, together with the Wardens & Brethren of Milton Lodge 1144 and their principal guests

The Provincial Grand Secretary read the celebratory Certificate, before giving way to the Provincial Grand Chaplain, WBro Rev’d Richard Hawkins, who was scheduled to give an oration. Like many present, I was not sure what an Oration was going to sound like, but having heard Canon Hawkins’ sermon at the Tercentenary Service at the Cathedral in September, I was fairly certain that we were in for a treat. I was not wrong and the Oration was excellent, interesting, thought provoking and certainly a daily advancement for everyone who was there. He spoke about the power of banners, standards and colours to evoke a sense of pride. He spoke of the original crest of the Lodge which he had first taken to be a Griffin. However, on discovering that the crest of the poet John Milton, who was born at the sign of the Eagle on Bread Lane in London, he changed his mind. Admittedly, Milton’s eagle was double headed, so the Lodge appears to have lost one head along the way, but at least that seems to give real credence to the idea that the Lodge was named after John Milton.

VWBro Derek Thornhill, the Deputy Provincial Grand Master, then spoke about the history of the Lodge. He pointed out that when the Lodge was founded Queen Victoria was on the throne and Viscount Palmerston was Prime Minister. It was a very different world back then, almost 50 years before the First World War, a time of Empires and Gunboat Diplomacy. However, the most important event in 1867 was undoubtedly the consecration of Milton Lodge. ”Be proud of your Lodge, be proud of what it has achieved in the past and work towards its next milestone, and the many happy meetings you will share on the road to that event”. Bearing in mind the fact that there are quite a few Masons who achieve fifty years in Freemasonry, and we are being regularly told that life expectancy is increasing steadily, it is perfectly possible that a member of the Lodge present at this meeting will be present at the Lodge’s Bi-Centenary in fifty years’ time.

But that was not the end, for VWBro Thornhill reminded us all that, on very special occasions like this, it was usual for a Brother within the Lodge to receive preferment. On this occasion a Brother had been selected who had been initiated into Milton Lodge 59 years ago. A stalwart of the Lodge and an Officer of Provincial Grand Lodge since 1981, who had been promoted in 1991 and was being promoted again, tonight. WBro Alan Mansley also had the distinction of being present, as Senior Deacon, on the night that Milton Lodge celebrated its Centenary on May 11th, 1967. With that, VWBro Thornhill invested WBro Mansley as PProvSGW. A very  well received promotion.
And finally, the Worshipful Master, WBro Leo Sterling, presented VWBro Thornhill with a cheque for £1500.00 from the Lodge in favour of the East Lancashire Masonic Charity in celebration of the sesquicentennial of Milton Lodge. A very suitable and appropriate gift. Many congratulations Milton Lodge, long may you continue and thrive.

The text and all of the photographs, either posted in this article, or available through an online photo gallery, are the work of, and copyright to

All of the photographs taken at this event are available in a Gallery on Google Photos at the following address https://photos.app.goo.gl/Oh4KzQztCnJkNhLU2