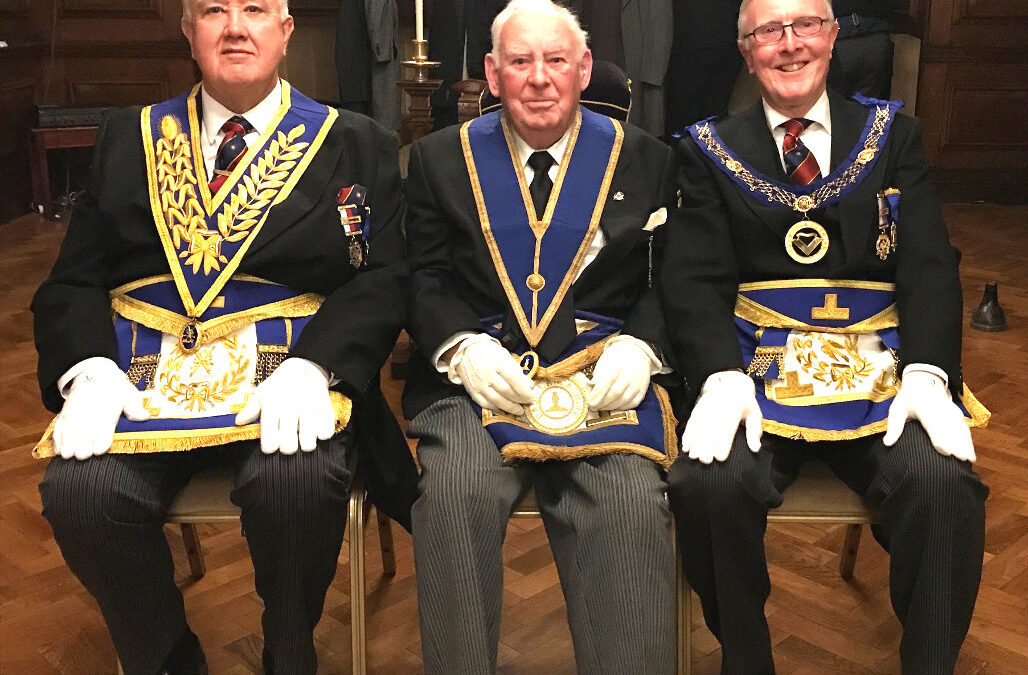 On 22nd March 2018, at the regular meeting of Felicity Lodge No 4365, WBro Neville Worthington PProvSGW celebrated 65 years in Freemasonry.
After the Lodge was opened and the minutes confirmed, WBro Chris Welton PSGD APGM together with a District delegation were received into the Lodge.
The Worshipful Master, Michael Gallagher offered the gavel to WBro Welton. Whilst thanking the WM for his kind offer, WBro Welton graciously invited the WM to retain the gavel.

The meeting continued with the initiation of Bro Nicholas John Browne and Bro Konstantinos Zacharioudakis by WBro Sean Higson PProvGSwdB acting as the WM.
Following the Initiations, WBro Welton was again offered the gavel and this time, he accepted it. He introduced the members of the district delegation who were WBro David Hudson PAGDC, Chairman City Derby District, WBro Russell Conn PProvDepGDC City Sykes District RADO, WBro Roy Chapman PProvDepGDC City Sykes District Mentor and WBro Richard Zoltie ProvSGD Manchester Area Communications officer.
WBro Neville Worthington was then placed in the centre of the Lodge.
WBro Welton started his tribute by stating how very rare it was to celebrate 65 years’ service in Freemasonry and how honoured we all are to join in your special celebration this evening. The APGM then mentioned a few significant events that occurred in 1953, the year of WBro Worthington’s initiation. There was the Coronation of HM Queen Elizabeth the Second, and Winston Churchill, the Prime Minister, was knighted in 1953.
Also, the Royal Yacht Britannia was launched, the Samaritans came into being, there was the North Sea floods which caused the death of hundreds, the structure of DNA was discovered and Sir Edmund Hillary and Sherpa Tensing made the first ascent of Everest. This was also the year of the Stanley Matthews Cup Final when Blackpool won the Cup, their first ever trophy.
WBro Welton then recapped WBro Worthington’s long and illustrious career in Freemasonry. He was initiated into Felicity Lodge on 22 January 1953 by his father, the WM at that time. His father was his Proposer and his Grandfather was his Seconder. He has held almost every major office in the Lodge, except Chaplain, and was Master in 2003, the year of his Golden Jubilee.
He got his first Provincial Rank as Acting Provincial Senior Grand Deacon in 1975 and was promoted to Past Provincial Junior Grand Warden in 1978. He was promoted again to Past Provincial Senior Grand Warden in 1999.
In the Royal Arch, having been exalted into Felicity Chapter on 12 January 1980, he achieved the rank of Past Provincial Grand Sword Bearer.  Honorary Membership of the Chapter was bestowed upon him in 2010.
WBro Worthington started work at 17 with the United Africa Company in Manchester before doing his National Service. He then worked in the textile industry until his retirement. The APGM also paid respect to Mrs Edna Worthington who had supported her husband throughout his 65 years in Freemasonry.

Officers and Brethren of Felicity Lodge, District deputation and visitors.

WBro Welton then closed by re-iterating how privileged we are to be here this evening and to celebrate and applaud the Service WBro Worthington has given, the contribution he has made, the knowledge and experience he has shared and the care has given to other Masons.
The Lodge had presented flowers to Mrs Worthington and she had written a beautiful letter of thanks to the Lodge.
Finally, WBro Neville Worthington presented a personal cheque to the ELMC to mark the occasion.
Prepared by Richard Zoltie.