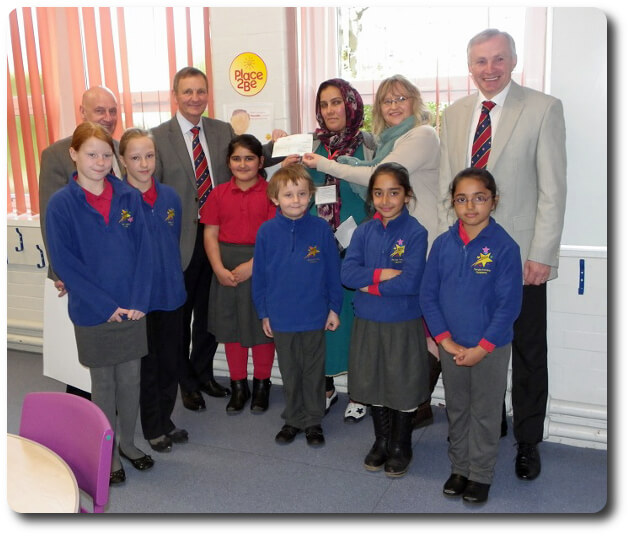 WBro John Farrington Presents the cheque to Carol Crawley – Parent Counsellor, with WBro David Lightbrown, WBro Paul Thornton the Parent Governor and pupils of Pendle Primary Academy
WBro John Farrington, the Assistant Provincial Grand Master for the Northern Area thanked those representing the Place2Be and the Pendle Primary Academy for their warm welcome and introduced his colleagues –  WBro Paul Thornton, the District Chairman for the Burnley and Pendle District, WBro David Lightbrown the East Ribble District Chairman and WBro John Wilkinson the Communications Officer for Burnley and Pendle.  Those in attendance included Simon Thompson – Head Teacher, Amanda Azouz – Place2Be Events Manager, Carol Crawley – Parent Counsellor, Leala Porter – Place 2Be School Project Manager, Nicky Lennox – Place2Be Cluster manager for Lancashire. Also present was a Parent Governor.
WBro Farrington briefly explained how the Province of East Lancashire is organised and the previous structure of the Masonic Charities saying that the four central Charities had been brought together as of 1st April 2016 as the Masonic Charitable Foundation. He then referred to the support previously given by Grand Charity to Non-Masonic Charities, the excellent work they do and how money is generated for their disposal.
Before presenting the cheque for £28K, which is to fund the post of Parent Counsellor, to work between eight schools / academies in the area he said how pleased Freemasonry was to be associated with the excellent work that Place2Be does and how Masonry was pleased to be able to assist the young people through the support for parents via this important and vital post. In making the presentation he wished Carol Crawley, the post holder continued success in her work and all involved from both Place2Be and the Academy, especially the young people, well for the future.
Following the cheque presentation, two Pendle Primary Academy pupils surprised WBro’s Farrington, Lightbrown and Thornton by presenting them with a beautiful handmade thankyou card which WBro Farrington was very pleased to accept.

Place2Be presently works in 257 schools / academies across the Country and deals with 105,000 children providing emotional and therapeutic support in a vast range of situations and circumstances.
The Parent Governor expressed her thanks for this very generous donation and referred to the support that her and her family had received. Going on to say that sometimes parents have busy lives and often don’t realise that they, or indeed their children, are struggling and need some support, she was personally most grateful that Masonry was able to help more people by funding the post of Parent Counsellor.
Whilst partaking of excellent refreshments there was the opportunity to meet informally with Academy staff, the Parent Governor, representatives of Place2Be and most importantly some of the young people. There was also an opportunity to visit a room in which much of the work takes place and to learn more about the approach that is adopted.

Visiting the Academy was a very positive experience for all concerned and it is pleasing that Grand Charity have been able to support these worthwhile activities.