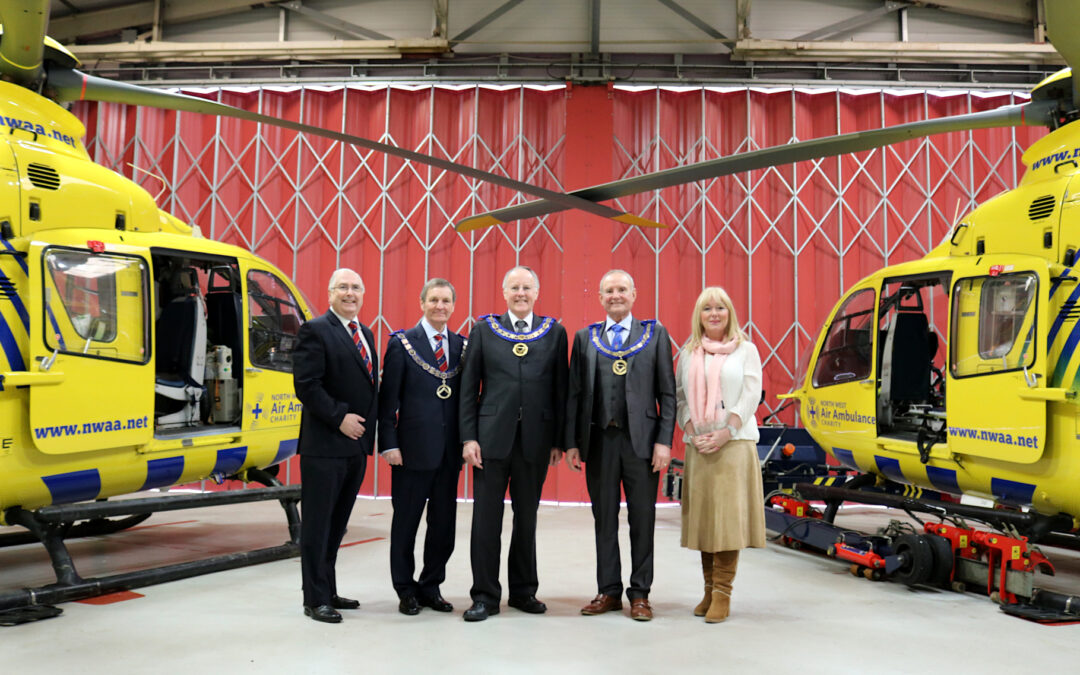 On this particular morning the two impressive Eurocopter EC135 helicopters were grounded due to poor visibility. One of the pilots, Lee took the opportunity of telling us that from the City Heliport (Barton Aerodrome) there is an easily referred to visual point which denotes the flying limit of 1500m; Barton Bridge! Of course, no chance of seeing it on that foggy morning.

North West Air Ambulance now have two rapid response cars which can take the place of the helicopters on days such as this should they be required, and are also able to carry blood supplies.
It turns out the helicopters, as we all can imagine, are hellishly expensive to operate. £9 per minute in fuel. Average call out cost £2,500. The recent grant of £12,000 will go a fair way to providing fuel for one air ambulance for a month.
We were then joined by Dr Matt who took us through the human element of the service. Weight is a primary concern, and Matt told us they themselves have a personal maximum weight they have to stay under in order to be allowed to fly. No masonic three course meals for him! The staff are on constant alert, and as if to prove the point Dr Matt had to leave us mid flow in order to attend to someone in need in the response car! Lynn, and Liz who are regional fundraising coordinators ably took over to continue the tour.

North West Air Ambulance operate three helicopters. two at City Heliport (Barton) and one over at Blackpool. A chart on the wall showed they can cover a fair proportion of the North West in 20-30 minutes travelling at up to 160mph. 20 minutes to Lancaster and North Wales.

The grant of £12,000, which comes through the Masonic Charitable Foundation, is funded by Freemasons, their families and friends, from across England and Wales. During the past few months, Freemasons from around the country have presented 20 regional air ambulances with grants totalling £192,000, and since 2007 £2.3 million has been donated by Freemasons to Air Ambulances across the country.
Keep an eye out for the TV series “Ambulance” (BBC) which will this year feature the North West Air Ambulance service.
North West Air Ambulance Charity is entirely reliant on donations to deliver its lifesaving emergency service. Should you wish to donate or learn more please click here.
Article: Alan Ogden