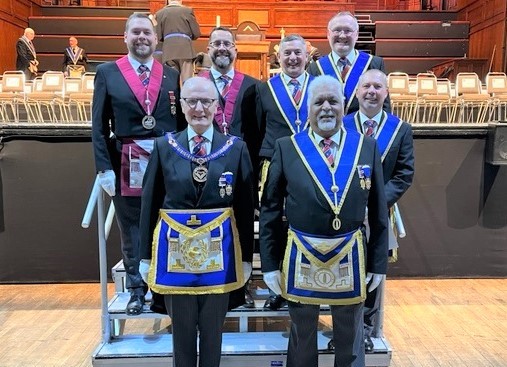 It was a special night, marking the final Provincial Grand Lodge meeting for Provincial Grand Master, Sir David Trippier. He was celebrating his decade long commitment and dedication to the role.

It also marked the official launch of the East Lancashire Festival which supports the Masonic Charitable Foundation.

The festival, running until 2026, aims to raise £2.4m to support the excellent work that the Charity does on our behalf and on behalf of its beneficiaries. More information on the Festival can be found at https://www.eastlancashirefreemasons.org/the-pglel-2026-festival-appeal/

Doug Smith, Rochdale District Freemasons’ Chairman said, “It was an honour to attend the Annual Provincial Grand Lodge and join in celebrating and recognising Sir David’s hard work and passion for supporting and developing Freemasonry in the Province of East Lancashire. I am sure all brethren in the Rochdale District will join me in thanking him for everything he has done.”

Finally, Congratulations to all brethren, especially the ones from Rochdale District, who received their first appointment or promotion at Provincial Grand Lodge.