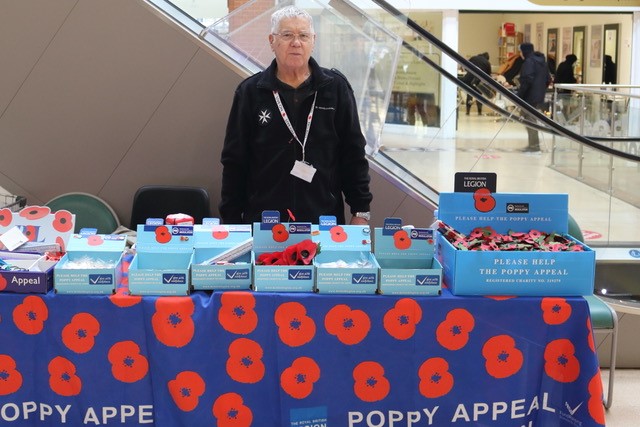 There is a saying that busy people make time. This must be the case for Ron Kershaw PProvSGD, especially this week as we approach Remembrance Day and Ron takes on the running of the Poppy Stall in the Arcades, Ashton Under Lyne.
Ron has been a member of the St John Ambulance Brigade since 1980; achieving the rank of County Staff Officer and being awarded the Service Medal of the Order and the title of Serving Brother of the Order of St. John of Jerusalem. He was presented with a certificate for support to the Ambulance Services during the Woodford Airshow Spitfire Crash in 1982.
Ron is currently the IMP at Prince Alfred Lodge 1218, as well as being a member of: Ashton and District Lodge of Installed Masters, a member of Chapter and Rose Croix. He was made an Honorary Member of the Royal Lancashire Fusiliers for his contribution in planning and running events for ex-service personnel.
Speaking about Ron Kershaw and his involvement in the Poppy Appeal, Tina Pringle, Secretary of the Ashton Branch of the British Legion, remarked that she wished they had more members like him. I am sure there are many volunteer organisations who share that sentiment.