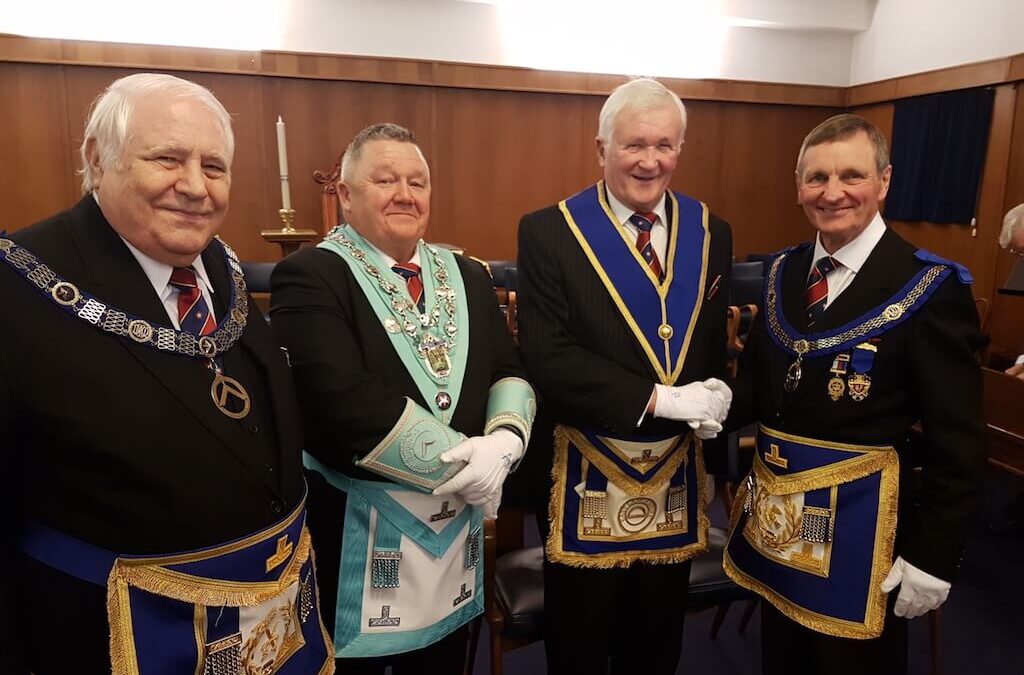 On 21st December over 50 Brethren assembled at Rhyddings Lodge No. 5205 at Accrington Masonic Hall to celebrate 50 years in Freemasonry of WBro Keith Ramsden PProvGSuptWks.

Bro John Carney the Worshipfull Master welcomed the deputation and offered VWBro Thornhill the gavel, which he immediately handed on to WBro Farrington who accepted and subsequently occupied the Master’s Chair. WBro Farrington expressed delight at being able to celebrate the evening with WBro Ramsden and the assembled Brethren.

WBro Ramsden was placed in the centre of the lodge and the minutes from his Initiation meeting on 7th December 1966 were read by the assistant secretary Bro Tony Metcalfe. WBro Stuart Hindle then read his tribute to WBro Ramsden. He stated that outside the Lodge Keith was a keen cricketer and footballer with local clubs, he also enjoyed singing in the local church, Holy Trinity in Oswaldtwistle. He is also a founding member of the Rhyddings Lodge ensemble who still sing to this day at social evenings, albeit with a different line up. Keith was a member of Immanuel Cricket Club, and Bro Hindle showed a team photo from 1962 showing him and his proposer into Freemasonry. Finally he stated how much Keith still enjoys his Freemasonry and how during the summer he looks forward to visiting his Lake District Retreat known as ‘Up Coke’.

WBro Farrington then went on to mention some notable events in history occurring in 1966, these included the England World Cup win, the average house price was £3840, the Severn Bridge opened, the Aberfan disaster occurred and the BBC started broadcasting in colour amongst other facts and tidbits. WBro Farrington then presented WBro Ramsden with his illuminated certificate which he read to the assembled Brethren. WBro Ramsden was then perambulated around the lodge to the rapturous applause of the Brethren. To complete the ceremony, WBro Lightbown presented WBro Ramsden with his 50th anniversary lapel badge and made reference to how well he looked and that he hadn’t changed since he has been visiting the lodge from his early Masonic days.

The Worshipful Master Bro Carney then had a very pleasant duty to perform in presenting WBro Farrington with a cheque for £200 as a donation to the ELMC, the cheque was greatfull received.

WBro Taylor ProvdepGDC asked VWbo Thornhill if he desired to retire with the deputation and WBro Ramsden, on his reply the deputation retired form the lodge to the festive board.

The festive board was a joyous occasion where the Brethren enjoyed a wonderful meal, excellent fellowship and amusing but sincere toasts and responses. WBro Farrington’s message was one of enjoying our Freemasonry and not being afraid to talk to family and friends about the fraternity. He also referenced the activities taking place in the Province during the tercentenary year. He particularly encouraged the Brethren to support the upcoming white table events to be held at all the Masonic Halls in the District.

This was a wonderful evening and we look forward to returning to celebrate WBro Ramsden’s 60th anniversary and to seeing how little he will have changed!