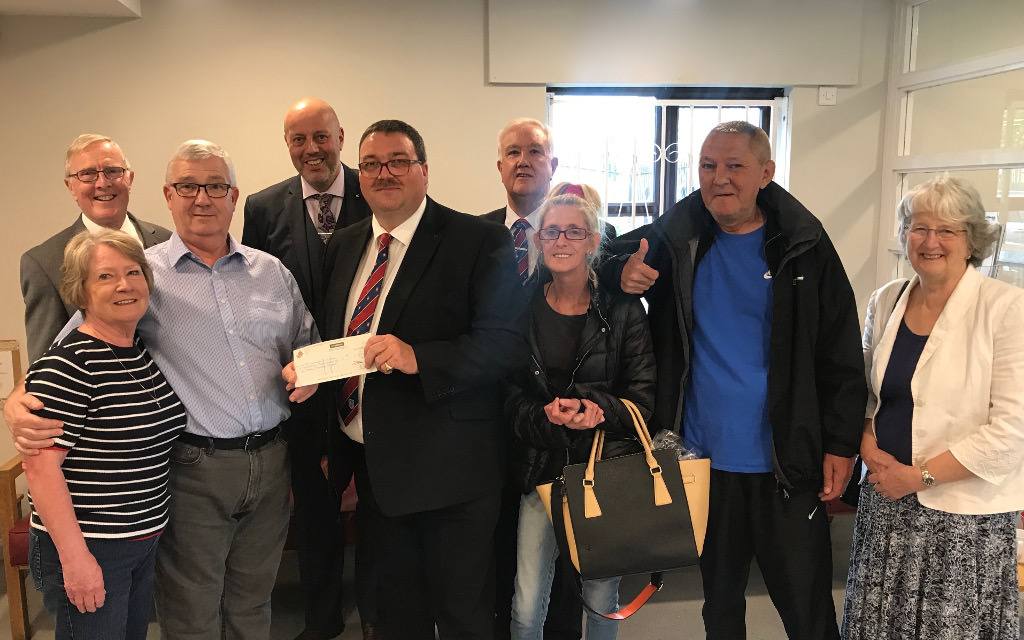 Loaves and Fishes
On Wednesday 30 August, Salford based Charity Loaves and Fishes, a drop in centre based in Salford, received a visit from members of the District team for City Derby District, Manchester. Also in attendance was WBro Christopher Welton, the Assistant Provincial Grand Master.
WBro Tony Stephenson, District Charity Steward presented a cheque for £1350 on behalf of the District from the East Lancashire Masonic Charity.
Salford Loaves and Fishes is a drop-in centre providing a warm and safe day-time shelter to homeless, vulnerable or isolated people from Salford and the surrounding community.
The Centre is open three days a week, between the hours of, 08:00 and 14:00, providing hot drinks and three-course lunches.   However, that’s not all, their vision is ultimately to improve the overall quality of people’s lives. The centre provides Doctors appointments, Dental Services, Literacy Support, Drug and Alcohol Support and advice from the Citizens Advice Bureau. They even have the occasional game of Bingo.

Their history dates back to the late 1990’s, when a group of Nuns offered support from the basement of Salford Cathedral. In 2006, they moved into Manchester City Mission, which was their home until April 2016. Since then they have had a couple of temporary homes in the Salford Area but in August this year, they moved into their fabulous new home on Paddington Close.
The new centre was purchased, considerably extended and refurbished for them by the Edward Holt Charitable Trust. In addition to the considerable support they receive from local charities and trusts, they also receive help from several corporate organisations including Pret a Manger and Nando’s.
The Trustees of the Charity include WBro Ken Palmer, of Minnehaha Lodge No. 2363, and his wife Glynis. They gave the District Team a guided tour of the facilities, who were amazed by the energy and dedication clearly exhibited by all of the members of staff and volunteers.
This donation is to help with the cost of equipment for their newly installed kitchen and is a glowing example of how the East Lancashire Masonic Charity can assist organisations making a real difference to the local community.
Unfortunately, the delegation were not able to stay for lunch but everyone they met said the food was delicious and that they were truly thankful for the help that they have received from Salford Loaves and Fishes.