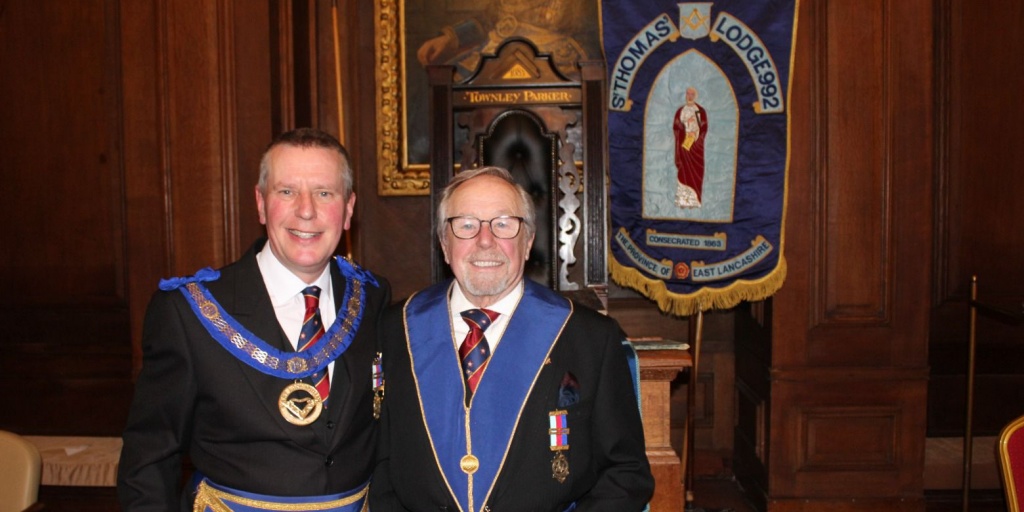 It was a memorable occasion for one Manchester Mason as St. Thomas Lodge Number no. 992 met at Manchester Hall on the 2nd March.

The evening was a celebration of the career of an exceptional Brother who has enjoyed 60 years of membership in Freemasonry, WBro. George Davis.

The mood amongst the brethren was jubilant, with over fifty of George’s Masonic friends in attendance from different Lodges from throughout the Masonic Province of East Lancashire, and other provinces.

The Lodge was opened in due form by the Worshipful Master, WBro Bill Bagnall. The Deputy Provincial Director of Ceremonies, WBro John Lees entered the Lodge and addressed the Worshipful Master, announcing that VWBro John Farrington, the Deputy Provincial Grand Master In Charge, was outside the Lodge and that he demanded admission. He then entered the Lodge accompanied by a Provincial Delegation. WBro Mark Davis also accompanied him. The latter is a distinguished member of the Lodge and the Assistant Provincial Grand Master for the Manchester Area, and more importantly, the son of WBro. George Davis.

The Deputy Provincial Grand Master in Charge was offered the gavel by the Worshipful Master, and on this occasion, he was delighted to accept.

The celebration commenced with WBro Bernard Armitage reading the minutes from the celebrant’s Initiation ceremony, which took place in February 1962.

Having been proposed by WBro Ben Oakley, WBro George Davis was Initiated in the Masonic Suite at the Griffin Hotel in Lower Broughton. So began his long and eventful journey into Freemasonry as a member of St. Thomas Lodge 992.

There then followed a heartfelt and very moving tribute from George’s son WBro Mark Davis who regaled everyone with a detailed history of George’s life as a Mason and also how as a son Freemasonry had brought them closer together over the years; he also gave an insight into the various offices that George had occupied in the Lodge which included being the Lodge Almoner for over 20 years!

The Deputy Provincial Grand Master in charge, VWBro John Farrington, offered the Brethren an overview of George’s achievements in Freemasonry which demonstrated his outstanding commitment to the craft. He then presented George with his illuminated certificate. WBro George then received the acclaim of the Brethren, who rose together to applaud the celebrant as he was escorted around the Lodge.

The Sykes District Chairman WBro Chris Armstrong then bestowed a 60-year pin on WBro Davis’s lapel; George then took to the floor and thanked everyone he had met along the way.

The Worshipful Master presented the Deputy Provincial Grand Master in charge with a cheque in aid of the East Lancashire 2026 Festival Appeal before he retired from the Lodge accompanied by the Provincial Delegation and the celebrant.

At the social board, WBro Armitage proposed a heartfelt toast to WBro Davis detailing some amusing tales about their friendship during their Masonic careers together over the past 60 years, describing George as a Prince amongst Masons. A fitting conclusion to the evening’s events.

All of us at Manchester Masons would like to wish WBro. George Davis all the best, and long may he continue to enjoy his Freemasonry.