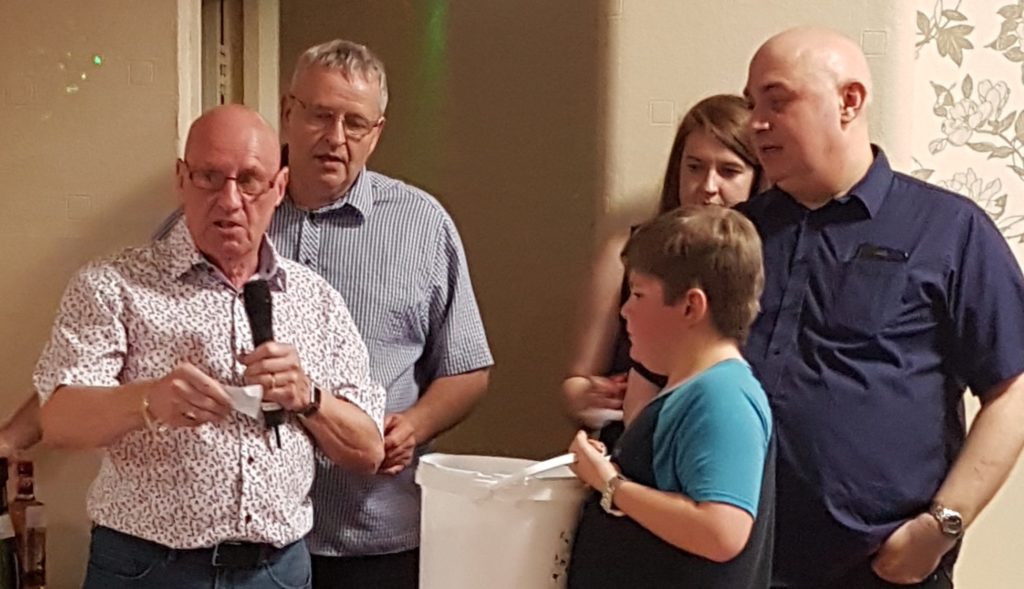 On the evening of 27th May over around 80 Brethren and their families gathered at the Adelaide Suite in Accrington for the summer raffle draw and a themed disco covering music from three decades, the 60’s, 70’s and 80’s. The DJ for the evening was WBro Stuart Gregory, the Worshipful Master of Coronation Lodge No. 3479. He began the evening by holding a balloon folding competition, the prizes for which were glow in the dark bracelets. WBro Brian Carter’s square picture frame construction was particularly inspiring and won him one of the much sought after bracelets! Great fun for both the adults and children alike. Before the dancing began in earnest, there was a lovely pie and pea supper served to the assembled. The lights were then lowered and the dancing began with a Northern Soul set followed by lots of classics from the three decades.
Towards the end of the evening it was time for our District Chairman WBro David Lightbown to draw the first ticket for the raffle. Once the numerous prizes had been claimed or put aside for the winners, WBro Lightbown thanked the District Charity Steward WBro Mike Stubbs and his assistant WBro David Gill for the work they had done during the Masonic year to raise funds for a large number of good causes. To this end, a presentation of £350 was made to St Bartholomew’s Church in Great Harwood for the building of a ramp. WBro Stubbs then presented WBro Lightbown with a cheque for £250 towards the Manchester Arena fund following the terrible attack there earlier in the week. This will be added to the £101,000 already raised by Freemasons within the Province of East Lancashire and other Provinces across the country in the four days since the event.
This was a wonderful evening with something for everyone whilst raising in the region of £1800 for charitable causes. The full list of winners will be posted here once it has been collated, checked and verified.