The 150th Anniversary of the Consecration of Borough Lodge – Celebration Meeting: 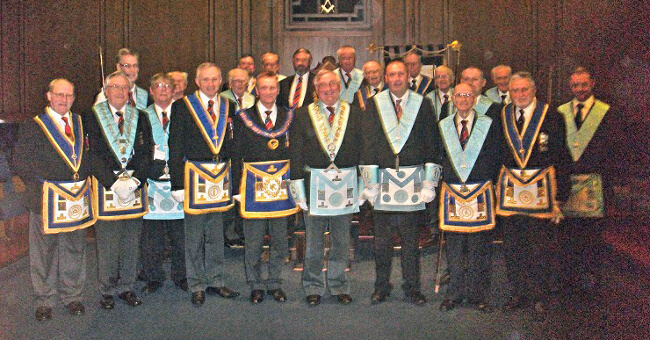 Borough Lodge No.1064 and Ashlar Lodge No.4858 amalgamated in 2010, becoming the Borough and Ashlar Lodge No. 4858. The enthusiasm and friendship of the Brethren has ensured that the union has prospered and the Lodge can look forward to the future with confidence.
In the words of Bro. Keith Beeston PJGD, the Worshipful Master, “At the time of amalgamation, we decided that so long as former members of the Borough Lodge were still members of the new Lodge, we would always remember that Lodge at our December meeting”.
In the presence of WBro John Farrington PSGD, APGM, together with a large number of Grand and Provincial Grand Officers and Brethren, WBro Beeston delivered a fascinating paper, describing the circumstances in which Borough Lodge was formed and referring to the number of Initiates in the early days. References were made to momentous events, affecting the town of Burnley, as well as the wider world, eventually reaching 1926, the General Strike and the birth of Ashlar Lodge.

Present at the meeting was WBro Kenneth Tomlinson, PProvJGW, who was initiated into Ashlar Lodge in 1961.

The two parts of the narrative being brought together, the Worshipful Master quoted WBro Martin Roche PSGD, the then APGM, in his address at the final meeting of Borough Lodge in 2010, “Your forebears had the courage, the insight and the strength to seek new Masonic adventures when Borough was formed. And now, you honour their memory, their service and their dedication by taking all they worked for and ensuring that it lives on, by giving, not just you, but all who have gone before you, a new opportunity, the opportunity of another new beginning”. WBro Farrington remarked that it was apparent that this opportunity had been grasped with both hands.
A cheque for £1064.00, in favour of East Lancashire Masonic Charity [ELMC], was presented to WBro Farrington on the night.
Both the Celebration and the subsequent Festive Board were a great credit to the Borough and Ashlar Lodge and all its Members, who displayed the finest principles of Masonry throughout. May they long continue to enjoy the Fraternity.
The Borough and Ashlar Lodge is already looking forward to celebrating the centenary of the consecration of Ashlar Lodge which will take place in 2026.