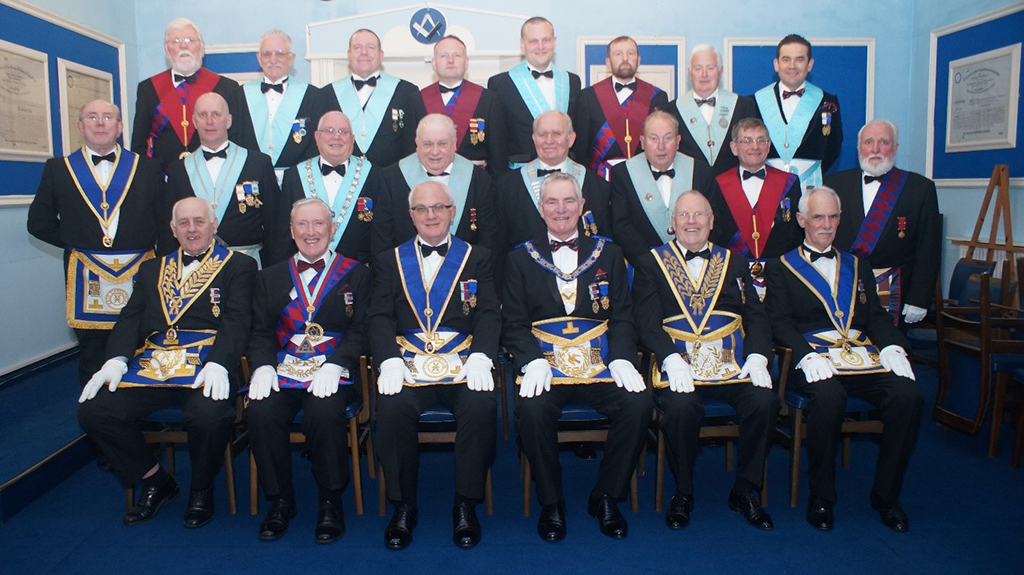 On Saturday April 29th, the Annual Assembly of Masters and First Principals was held at Westholme, Mossley. This annual event is traditionally hosted by the District Chairman but due to his recent illness our Chairman, WBro Peter Douthwaite, was confined to his hospital bed whilst the Brethren, Companions and their partners enjoyed an excellent meal, flowing wine and wonderful company until late into the evening.
WBro Steve Boyle, our Deputy District Chairman manfully stood in for Peter, welcoming everyone prior to the commencement of the festivities. In his address, Steve wished Peter a speedy recovery from his illness. He thanked the honoured guests for their attendance and congratulated WBro Pearson on his appointment to Supreme Grand Chapter rank. He ended by thanking all the Ladies for supporting their husbands during the year, without which support the men would not be able to keep up their masonic commitments. He ended by thanking WBro David Dredge, the District Secretary for organising this event.

Our Principal guests were the Assistant Provincial Grand Master, WBro John Pearson, and his wife Denise, accompanied by EComp Eddie Barlow, our Assistant to the Provincial Grand Principals.In his address to the Brethren, Companions and their Ladies, John spoke about his feelings in this Tercentenary year. He said, “This is an occasion when the Masters and Principals should feel immensely proud to have the privilege of representing their Lodges and Chapters in this special year when we celebrate 300 years since the formation of the Premier Grand Lodge in 1717. You have by your efforts earned the esteem of your brethren and companions to receive the highest honour they can confer upon you – and in particular those of you who have taken the Chair for the first time. On behalf of the Province I congratulate you and wish you a very happy, healthy and successful year in office. Thank you, and especially your ladies who give us the support that we need to enjoy our Freemasonry, for coming along this evening.
We are part of a wonderful organisation. You may have been present at the fantastic Charity Giving Night at the end of March, when we welcomed not only the Civic Mayor of Tameside but for the first time our Provincial Grand Master Sir David Trippier. There was standing room only at Stanley House with more charities or organisations attending to receive their donations and who all took the opportunity to say something about their own appeals.
Last year we were told that it was the best evening we have had ever since its inception 9 years ago. Well this year was even better. I said last year that I have never been more proud to be the APGM of our Southern Area and I was delighted this year when our PGM said that he had never been more proud to be PGM of this Province.
The Civic Mayor was astounded to see so many organisations receiving donations, especially when we learned at the end of the evening that the total donated on the night was £42000 – and £500,000 over the 10 years we have been holding the event. He couldn’t believe it. He had no idea we do so much.
We can be proud not just of what we do for charity but also that we look after each other. We think tonight of Peter Douthwaite who I am relieved to know is making a good recovery, of Dennis Thomas, Eddie Barlow, George Perfect, Clair Casson, Harry Rodgers, Peter Brodie and several others known to us and hope they will be returned to good health. Thank you to Peter, Steve and all the team, particularly David and Maggie Dredge, for making the arrangements for this evening.”

WBro Ian Casson sang for his supper.
It is very appropriate that we are here at Mossley, where I was initiated nearly 30 years ago, as it is exactly 50 years this month since my father was the solicitor and Freemason who witnessed the signatures of the 12 Subscribers on the formation of Mossley Freemasons Hall Ltd. So this is a celebration of our first 50 years here and ofthe first 300 years of Grand Lodge. We have several Tercentenary Celebrations coming up. Let’s all enjoy the parties to follow. Thank you all for coming tonight and for your friendship. “
In recent years, the District Chairman has extended the invitation to attend to all Brethren and Companions, which has resulted in Wardens, Brethren and Companions joining in one of the social highlights of Ashton & Mossley District’s year.
37 sat down to the meal, perhaps fewer than in previous years, though the fact that the date clashed with the May Day holiday might account for the reduction in numbers. After enjoying an excellent meal, we were entertained with songs from WBro Mark Reader who “sang for his supper” and, not to be outdone, this was followed by an impromptu performance by WBro Ian Casson who gave an excellent rendition of several old favourites such as “Mac the Knife”. This aspect of the Assembly, first introduced twelve months ago, was extremely well received.
Another most enjoyable night for those who attended, which has left everyone looking forward to 2018