The Final meeting of Red Rose of Lancaster Lodge No 1504 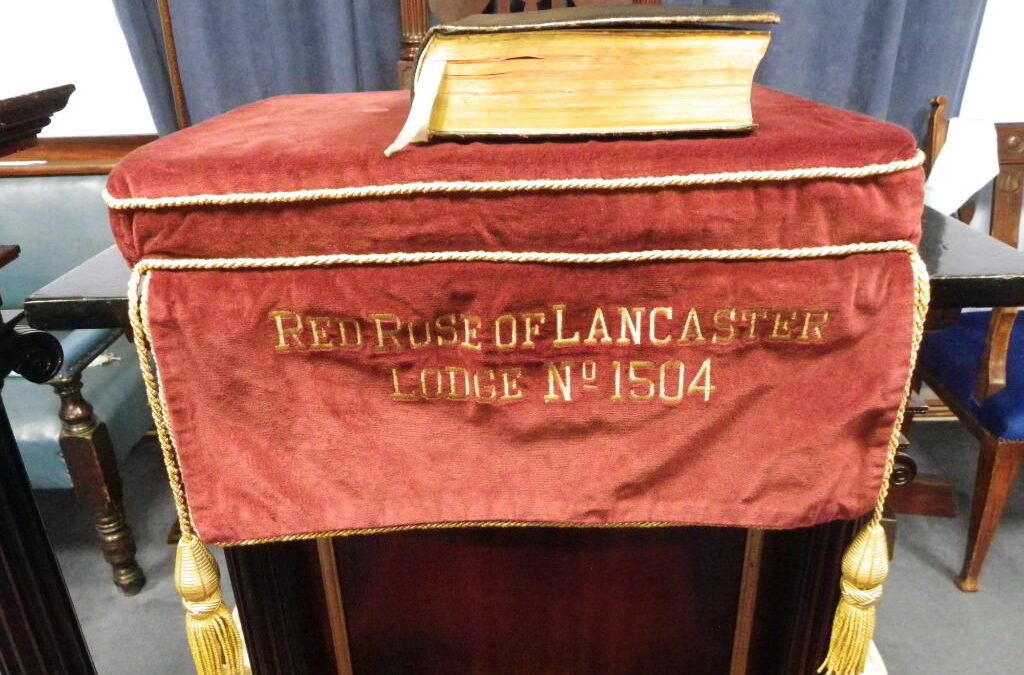 Over 50 Brethren, including The Assistant Provincial Grand Master for the Northern area of the Province of East Lancashire, WBro John R Farrington, PSGD, and many visitors, including members of the District team, signed the Tyler’s attendance register on Thursday the 3rdMay 2018, for the final meeting of The Red Rose of Lancaster Lodge, No 1504
The Lodge was opened by the Worshipful Master, WBro Steven Irving.
WBro John R Farrington was then saluted in due form. WBro Farrington responded by thanking the Brethren for their kind, fraternal salutations. The Worshipful Master offered the Gavel to WBro Farrington who thanked him and said that – “it was always an honour and a privilege to be offered the Gavel but that on this occasion the Worshipful Master should retain his rightful place in the Lodge”.
The Worshipful Master promptly conducted the regular items of business and then invited WBro Stanley Smith, PProvDGSwdB, to present a short history of the Red Rose of Lancaster Lodge.
WBro Smith delivered a most interesting history of the founding and early history of the Lodge, including reference to his father, a Past Master of Red Rose. This received the approbation of all present.

Alms were collected, and the final items of business were efficiently dispatched.
The Assistant Provincial Grand Master was then invited to give a short address the Brethren.
WBro Farrington indicated that he had noted the emphasis from the Worshipful Master on the word “short”! He thanked the numerous visitors and the representation from the Burnley and Pendle District for their support on this occasion and most importantly the Brethren of the Red Rose of Lancaster Lodge for the good work that had been done in the Lodges 144 year existence, it having been consecrated on the 20thJanuary 1874.
He commented that whilst the closing of a Lodge is of course sad because of the circumstances and the very positive feeling that presently exists it was less so than usual on this occasion.
The Lodge had carefully considered the options available and had decided to closes whilstcelebratingits existence, cherishingits memories and looking to the future;the Members, particularly the senior Members of the Lodge were congratulated on their clarity of thought and strength of character in making that decision.
WBro Farrington then thanked WBro Smith for his presentation on the history of the Lodge and wished all the Brethren well for a happy and successful future. In conclusion he thanked the Worshipful Master for the opportunity of speaking with the Brethren.
The Lodge was closed for the final time.

The Brethren of the Red Rose of Lancaster Lodge formed a line in the south on the floor of the Lodge and in what was an emotional moment for many, the Warrant of the Lodge was passed from Brother to Brother until it came into the hands of WBro Colin Wignall, the longest serving member of the Lodge, who then handed it to WBro Farrington. WBro Farrington received the Warrant on behalf of the Right Worshipful Provincial Grand Master for transportation to the Most Worshipful the Grand Master at the United Grand Lodge of England for erasure. He thanked the Worshipful Master and WBro Farrington, accompanied by WBro Wignall retired, followed by all the Brethren.
The well attended Social Board was happy and convivial, all the Brethren and visitors enjoying each other’s company and looking to the future with a determination to succeed and to enjoy their Freemasonry. It was reported at that time that all but one member of the Lodge, who is yet to decide are either already members of other Lodges, have joined a new Lodge or are in the process of doing so; an excellent conclusion to a successful meeting.