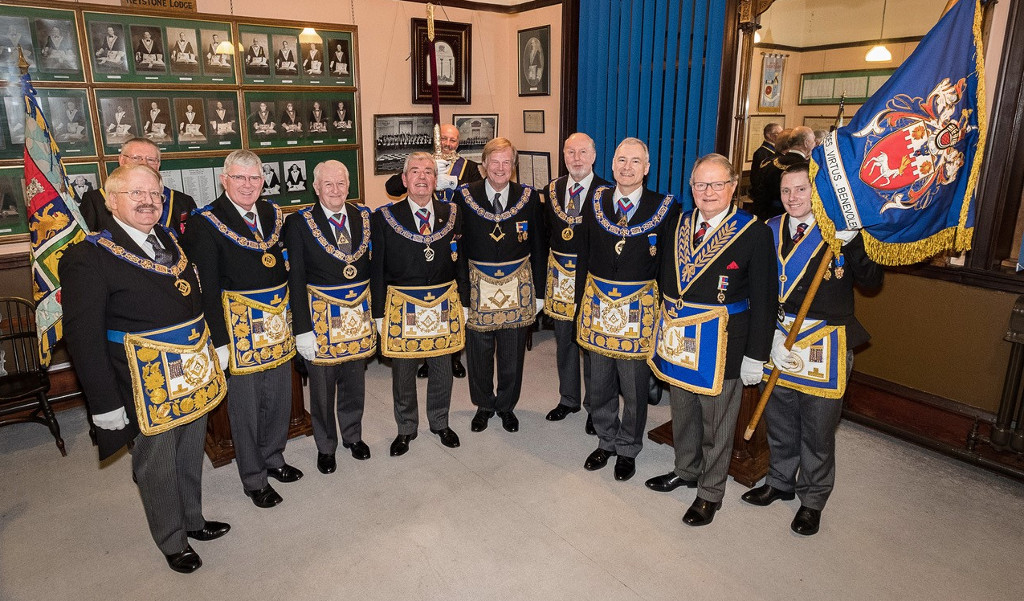 The Lodge members turned out in strength for this celebration and were well supported by a retinue of high ranking dignitaries led by The Right Worshipful Assistant Grand Master Sir David Wootton and Distinguished Guests.
The celebration was conducted by Sir David Wootton, who gave a very interesting and detailed account of Sir David Trippier’s career starting with his joining the lodge in 1968 at a tender age of 21.

Born in May 1946 our Provincial Grand Master was educated at Bury Grammar School and later commissioned as an Officer, serving in the Royal Marine Reserve for 30 years.  He also served with 40 Commando Royal Marines in Singapore and Malaysia, 41 Commando in Malta and was awarded the Royal Marines Reserve Decoration in 1983.
At the age of 22 he was admitted to the Stock Exchange. He was elected to the Rochdale Metropolitan Borough Council in 1969 and in 1975, at the age of 28, he became the leader of the Council.  In the same year was appointed a magistrate.
In 1979 he was elected as MP for Rossendale and became MP for the new constituency of Rossendale and Darwen from 1983 to 1992.
In 1987 he became the Minister for Housing, Inner Cities and Construction in the Department of the Environment. As the “Green” Minister he was instrumental in negotiating the international agreements on Climate Change and Global Warming on behalf of the United Kingdom.
In February 1994 he became a Deputy Lieutenant of Lancashire. In April 1997 he became High Sheriff of Lancashire for the year 1997/1998. He continued to expand his career and in November 2006, Sir David won a National Award for “Outstanding Leadership” sponsored by the Daily Telegraph. He was also nominated as one of 100 of Britain’s most influential men and women in the Public and Private Sectors.
Sir David was knighted by the Queen in July 1992 when he was 46 years of age.
He is married and has three sons. His wife, Lady Ruth Trippier is a practicing barrister on the Northern Circuit. Sir David is quoted as saying;
“If it wasn’t for being a Freemason then I wouldn’t have met my wife Ruth.  My     father was friends with her father and I had been asked to her house for a lodge meeting rehearsal and saw her photograph. I deliberately got it all wrong so I could go back to the house again in the hope of meeting her”.
The AGM RWBro Sir David Wootton then read a letter of congratulations from The Most Worshipful Pro Grand Master Peter Geoffrey Lowndes.

WBro Martin Roche PSGD, PAPGM read a letter of congratulation from the Craft Cabinet and then presented Sir David with a richly deserved illuminated Certificate after which he was then paraded around the Lodge to great acclaim by all present.
To conclude the formal proceedings a 50-year lapel badge, to be worn with pride, was presented by the District Chairman, WBro Peter Rhodes.
The Social Board was a happy and convivial affair with everyone present enjoying the atmosphere and fellowship. RWBro Sir David Wootton gave a heartfelt and eloquent response to toast No 4 which led to the War of the Roses (part 2). After winning the battle for a second time Sir David Trippier said he  had thoroughly enjoyed the occasion and commented that it was one he would remember for many years to come. He thanked all who had contributed to making the evening so special for him.

The report was written by WBro Doug Smith and the photographs were taken by WBro Ken Rowlatt.