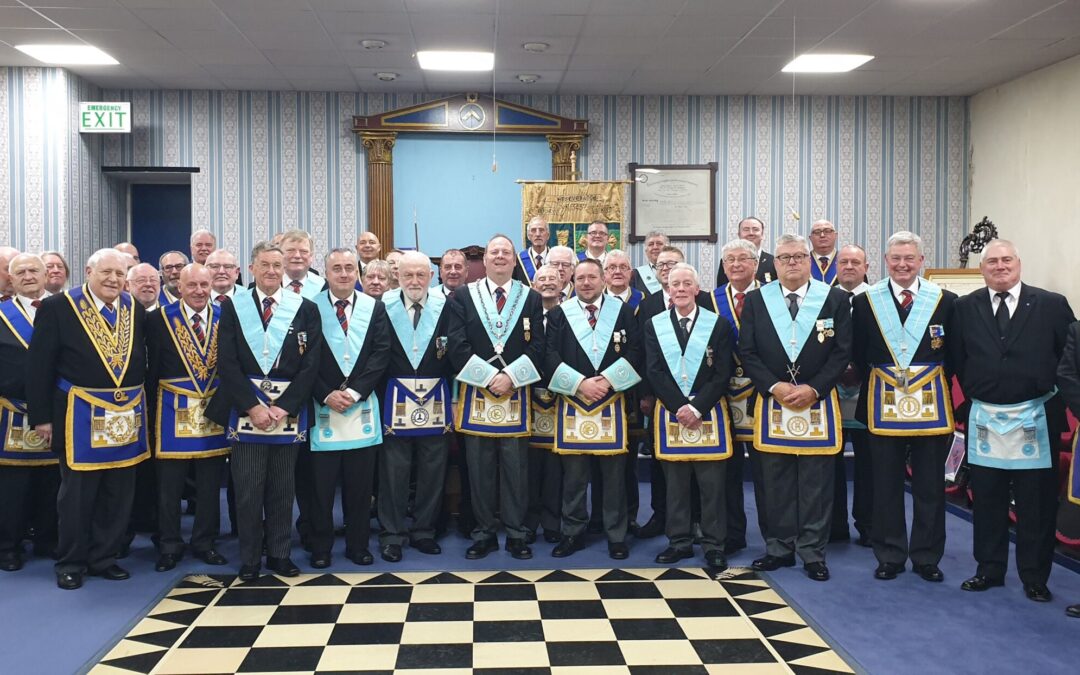 Tuesday 16th November saw the doors close for the last time at Blackburn Masonic Hall. The privilege of hosting the final meeting fell to The Lodge of Perseverance No. 345 and a number of Brethren from all corners of the District came to support them, as well as to get a final look at the building that has been home to Freemasonry in Blackburn since the turn of the 20th Century.
By all accounts this could have been a very sad meeting, but it was quite the opposite in many respects. Perseverance is a very positive lodge and they survived the closure by adopting a new home in Darwen, and they are very much looking forward to this next stage in their rich history. Throughout the evening there were many tales of the past, but many more about the future.The Lodge business was conducted with dignity and humour, managed by the Worshipful Master Malcolm Roe. The highlight was a talk entitled ‘The Orange Hall Blackburn’ given by the Hall manager for the last 22 years, James Abbott, which highlighted the birth of Blackburn Masonic Hall and it’s early history. Including the fact that at some stage it was a ‘well heated building!’
The festive board saw the brethren enjoy a wonderful final meal in great company and positivity throughout. In his response the District Chairman Dave McGurty paid tribute to his fellow Grand Lodge Officers for their advice and understated efforts in the District. He continued to thank The Lodge of Perseverance for the manner in which they had conducted themselves in dealing with the closure of their home, he encouraged them and all the other Lodges who will be following them to Darwen to think of the future and cherish the past. Dave concluded by thanking Phil Beaumont and his wife for the work they did during the early stages of the pandemic to make the building Covid secure and the huge decorating project they undertook. Phil’s dedication even stretched to him sustaining broken ribs doing some of the work, dedication over and above!
The meeting closed for the last time with a final comment from Malcolm Roe, who encouraged everyone to visit them in their new home, but more importantly for the Brethren to visit lodges they maybe haven’t been to before. It was then chance for the Brethren to have a final walk around the rooms for nostalgic reason, where was strange to see everything numbered for the auction that is taking place before the building is finally handed over to its new owners. As one door closes then another very positive one opens just down the road in Darwen.