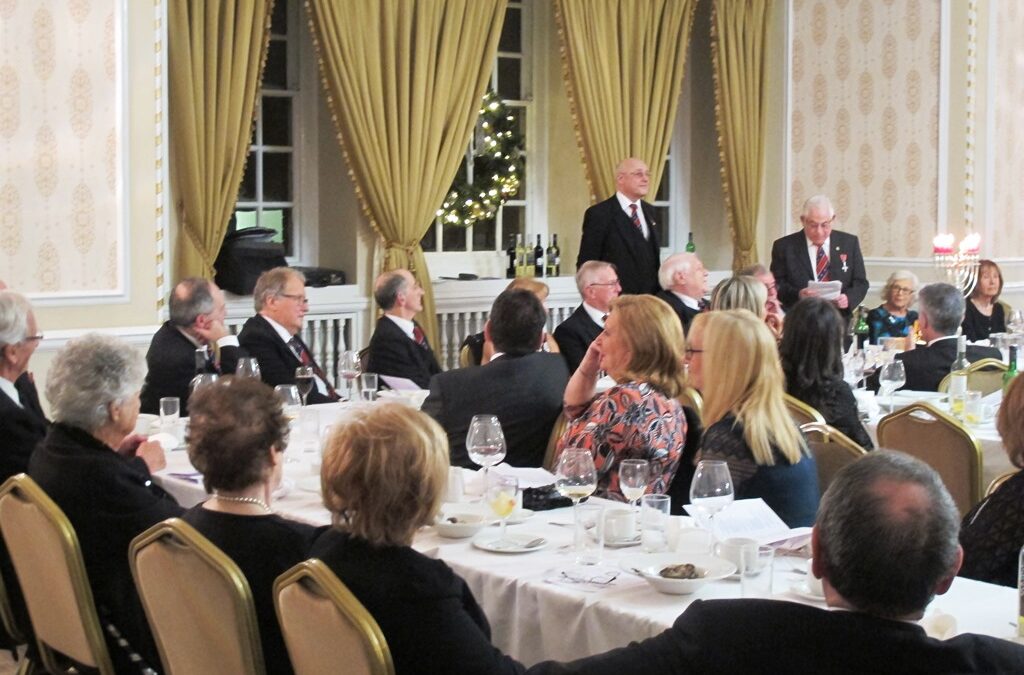 The evening of 18th December was not only a very special for WBro Henry Donn but also for the members and guests of Arkscroll Lodge. Over 100 people attended the meeting to celebrate the 60th Anniversary in Freemasonry of WBro Henry Donn MBE, JP, PProvSGW
After the Lodge was opened and the minutes confirmed, WBro Simon Archer the Provincial Grand Director of Ceremonies was admitted and announced that VWBro Derek Nelson Thornhill JP, PGSwdB, the Deputy Provincial Grand Master, accompanied by a Provincial Deputation was without and that he demanded admission.
The WM, WBro David Krebs PProvJGD, offered the gavel to VWBro Thornhill who readily accepted it and said that it was a great honour and privilege to do so and how very pleased he was to be here on this very special occasion.
The Deputy PGM thanked the Brethren for their salutations and introduced the Deputation which included WBro Chris Welton, WBro David Basger, WBro David Hudson, WBro Joe Glass, WBro Mo Afsa, WBro Simon Archer, WBro David Cowen together with a number of Grand Officers; RWBro Graeme Elliott, WBro Martin Caller, WBro Leslie Berkeley, WBro Henry Bentwood and WBro Andrew Holland.
VWBro Thornhill then welcomed the Brethren of the Lodge who had been promoted or appointed at the recent meeting of Provincial Grand Lodge.

VWBro Thornhill then called off the Lodge and he welcomed the very many visitors and non-masonic guests who had come to join the celebration. He explained the significance of the Tyler and the square, level and plumb rule as shown in the lodge. He also congratulated WBro Leslie and Mrs Valerie Berkeley on their 62nd wedding anniversary which they were celebrating this evening and Leslie’s 55 years in Freemasonry.
The Deputy PGM announced that the main business of the evening was to celebrate the Diamond Anniversary of WBro Henry Donn. This was a particularly noteworthy milestone in Freemasonry. WBro Donn was then placed in the centre of the Lodge, together with his wife Della, by the Provincial Grand Director of Ceremonies.
VWBro Thornhill then recounted the most notable events in Henry’s life both within Freemasonry and in the wider community. Henry was born in 1931. He founded Whitefield Abbeyfield Home for the Elderly, President of Whitefield St. Johns Ambulance Brigade Cadets and sat on the boards of Crumpsall, Springfield, Jewish, Bury General, Fairfield and Ancoats hospitals. He served on Whitefield Urban District Council as an Independent and was the Mayor. He has also served as a Magistrate in Bury for 26 years. He was also a founder member of Whitefield Hebrew Congregation and Life President of Urmston Burial Board. And for this tireless work in the community he was awarded the MBE in 2016.
In Freemasonry, Henry was WM of his lodge in 1971, received Provincial honours in 1983, promoted to PProvJGW in 2004 and promoted again to PProvSGW in 2017.
In his usual friendly and amusing manner, VWBro Thornhill then delighted the Brethren, visitors and guests by referring to some other events which happened in 1957, the year WBro Donn was initiated. Singapore was granted independence, petrol rationing stopped, the hydrogen bomb was tested and there was the first televised Christmas message from HM The Queen. The average house price was £2,280 but the average pay was £650. The biggest selling record was Diana and we also heard a few bars from this and also Singing the Blues. Famous films released that year were Bridge over the River Kwai and Gunfight at the OK Corral.
VWBro Thornhill then read a personal letter and presented the illuminated certificate from the Right Worshipful Provincial Grand Master to WBro Donn, who was then escorted around the Lodge room by the Provincial Deputy Grand Director of Ceremonies to the acclaim of the Brethren and guests. On concluding this part of the meeting, a lapel badge signifying 60 years in Freemasonry was presented to WBro Donn by the District Chairman, WBro David Hudson.

The WM then presented a cheque for £100 for the ELMC to the Deputy PGM who received it with thanks. Following the alms collection, the non-masonic guests retired from the Lodge and the Lodge was called on.
VWBro Thornhill was then asked if he, accompanied by the Provincial Deputation and Grand Officers together with WBro Donn, wished to retire. Having given his assent, the Provincial Grand Director of Ceremonies led the retiral procession out of the Lodge to the acclaim of the Brethren.
The Social Board was an entertaining, friendly and genial affair. WBro Leslie Berkeley, a lifelong friend of WBro Donn’s gave a most sincere and fulsome tribute to his friend and WBro Donn’s response was very well received by all those present demonstrating the high esteem in which Henry is held.
Report and photographs by WBro Richard Zoltie