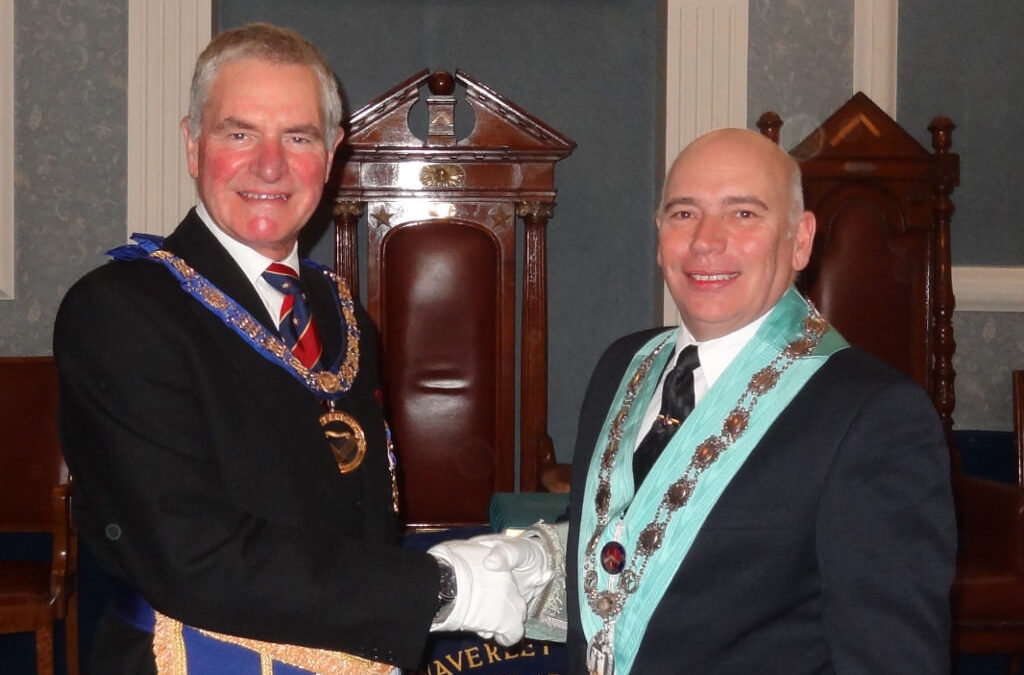 Waverley Lodge No 1322 is now getting quite close to celebrating its 150th Anniversary, no mean feat in today’s changing world. On Thursday 27th October in 2016 they held their Installation Meeting at Ashton Masonic Hall in the presence of WBro John Pearson, the APGM for the Southern Area of our Province. WBro Pearson was accompanied by the WBro Peter Douthwaite, the District Chairman and most of the District Team, together with Acting Officers of the year.
They were privileged to see what has been described as being “a most excellent ceremony” which saw Bro Gregory Edwards being proclaimed as Worshipful Master for a second consecutive year. The Proclamation itself was delivered by Waverley’s Director of Ceremonies, WBro Harry Kearney in a very professional manner. Only to be expected from a man who runs his Lodge’s ceremonies like a “well-oiled machine”.
I asked about the high points of this meeting that I was unable to attend, and was told that two things stood out in particular. The first was Bro Brad Savidge who delivered the First, Second and Third Working Tools in “a faultless manner”. The second was the redoubtable WBro Eric Aldred who delivered a “flawless” address. I must admit that I would expect no less from a Mason with such an outstanding pedigree, but it is good to know that a relatively newly made Mason such as Bro Brad is following along in the same footsteps.

At the Social Board, WBro Pearson congratulated the Lodge members on their success, following on from the good example of their predecessors. He then mentioned the Tercentenary as an opportunity to showcase Freemasonry and our wish for everybody to act as Ambassadors for something that we clearly hold in such high regard. He commented that, as well as our core objective of making good men better, there was a lot that we should be very proud of. Charity donations by the Masonic Charitable Foundation amounting to almost £15 million have been awarded to almost 5,000 Masonic Families in the last year, £500,000 is given away by our own ELMC each year AND we must not forget the further £5 million that was given by the MCF to non-masonic causes in the last year alone. He also mentioned the fact that we must be proud of, and talk about the fact that our fraternity is open to, and attracts, a diversity of all faiths and men from all walks of life. He ended by asking for everyone’s support for our PGM at the Provincial meeting on 17 November.
Our congratulations go to the Worshipful Master for being reinstalled into the Chair of his Lodge, and to the Lodge as a whole for its continuing success.