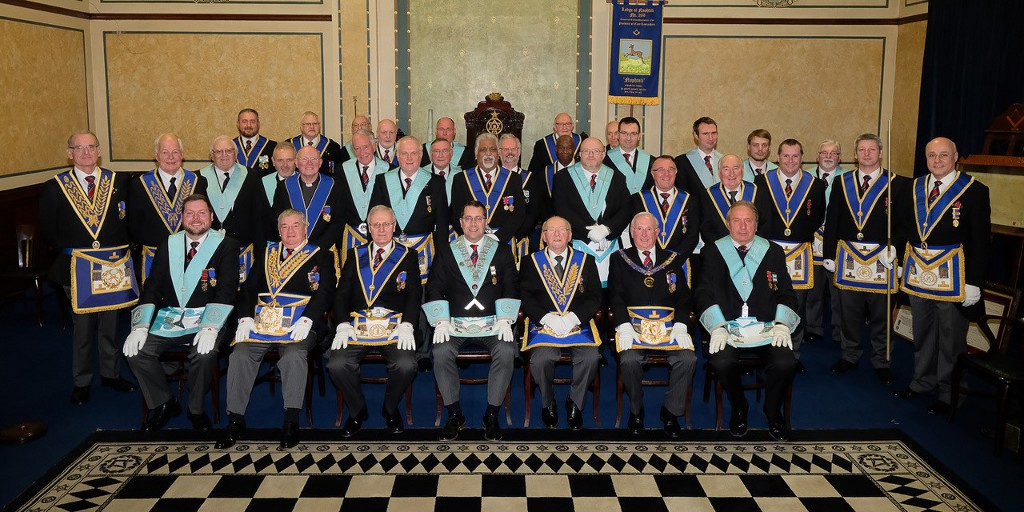 The Lodge of Naphtali No.266 held a 50th Personal Birthday celebration on Thursday 5th January for WBro Bernard Barry Birch PAGSuptWks.  The Lodge members turned out in strength for this celebration and were well supported by the Rochdale District Officers led by Chairman WBro Peter Rhodes PProvJGW.
The celebration was conducted by APGM WBro Peter G Hewitt PSGD, who gave a very interesting and detailed account of Barry’s career in Freemasonry starting with his joining the lodge in 1966 and continuing with his installation into the Chair of King Solomon in December 1981, his appointment as Provincial Steward in 1987, his promotion to PProvSGD in 1990, to PProvJGW in 1999 and to PAGSuptWks in the year 2000.  WBro Hewitt remarked that Barry was the first member of Napthali Lodge to achieve Grand Rank in its 228 year history.
A tribute was presented by one a long-standing member of the Lodge, WBro Keith Walker PProJGW.  Keith pointed out that Barry was a very proud Heywood lad, who had attended Heywood Grammar school and then the University of Manchester School of Dentistry. After qualifying he started his own Dental Practice in Heywood and later expanded by opening a Dental Practice in Rochdale.  Throughout his career Barry has always been involved in Charitable work both within and outside Freemasonry. In 1994 he was appointed a member of the Hewlett Court Management Committee on which he served for 18 years, of which 8 were served as Deputy Chairman. He was also elected to the ELMBI in 1995 where he served for 6 years.
Outside Freemasonry Barry has, for 53 years, been an active member of ‘Heywood Crusaders’ which raises money for less fortunate people.  He is a member of the ‘Heywood Township Redevelopment Committee’ and has also served on the ‘Rochdale Mayoral Fund Raising Committee’
WBro Rhodes read a letter of congratulation from the RWPGM Sir David Trippier after which WBro Hewitt read and then presented Barry with a richly deserved illuminated Certificate after which he was then paraded around the Lodge to great acclaim by all present.

The celebrations continued downstairs at the Social Board where an excellent meal was enjoyed by all present.  WBro Rhodes presented Barry with a 50 year lapel badge and the evening concluded by Barry thanking everyone for making the evening such a memorable and special occasion.