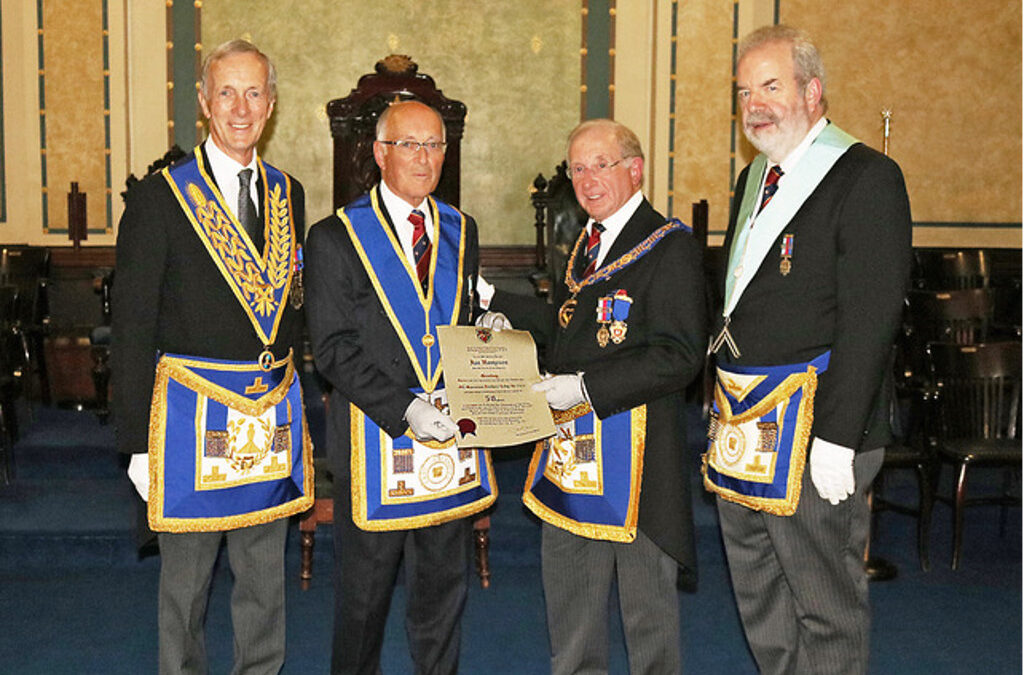 Monday the 9th October saw the members of the Rochdale Installed Masters’ Lodge No 9211, together with many of his friends, gather to celebrate the Personal 50th of WBro Ian Hampson PProvGReg.
The ceremony was conducted by WBro Peter Hewitt PSGD APGM who was accompanied by the Rochdale District Chairman, WBro Peter Rhodes and a deputation from the Rochdale District Team.
The Tribute to Ian was presented by WBro Alan Plater PProvAGDC, an old friend from his days at the Masonic School for Boys, who highlighted Ian’s love of singing and related several humorous anecdotes of their time together.
The APGM then gave an overview of famous people who were born in 1967 and notable events of that year and, assisted by the District Chairman, presented him with a letter of congratulation from the Prov Grand Master, together with an illuminated certificate, before he was paraded around the Lodge Room, to the acclaim of the brethren, by the DpProv GDC WBro David Cowen.

A lively Social Board followed with an excellent meal chosen by the ‘Birthday Boy’ and the special toast of the evening being presented by his brother Sir Stuart Hampson PSGW, Companion of the Royal Victorian Order, Deputy Lieutenant of Buckinghamshire former CEO of John Lewis’ Stores.
In his toast Sir Stuart explained how he and Ian were supported by Freemasonry after the death of their father at an early age and educated at the Masonic School for Boys, without which neither of them would have had the careers they enjoyed, and emphasised that they have both promoted themselves as examples of where our charitable donations go.
After the Tyler’s toast the brethren chatted, mingled and gradually dispersed after an excellent evening of Masonic Fellowship.
This report was prepared by WBro Bernard Percy PProDepGDC