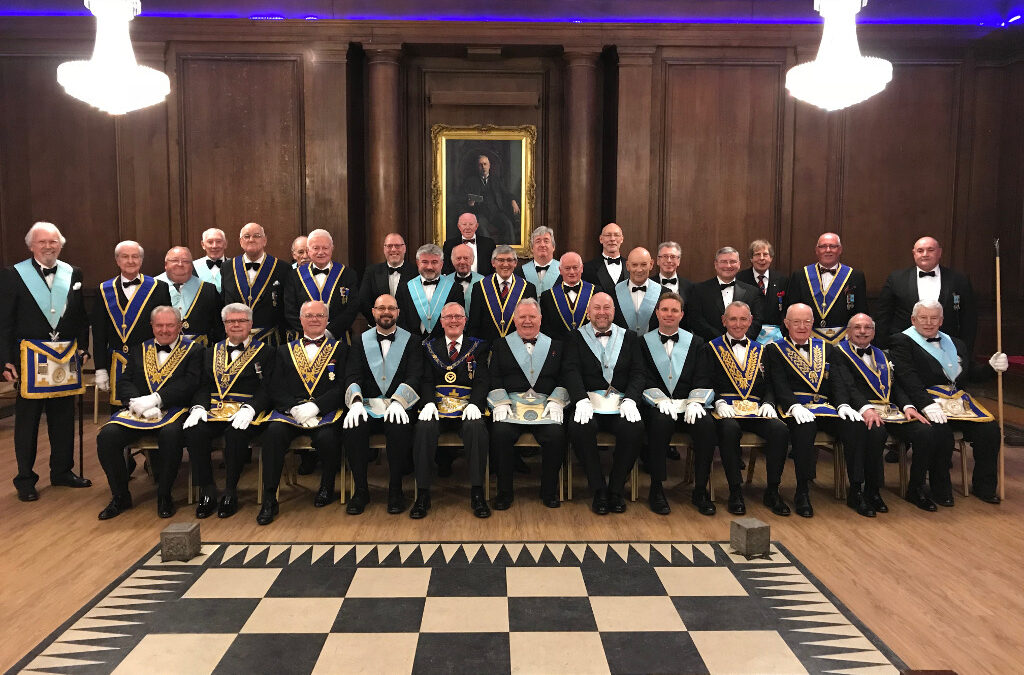 On Monday 20th November 2017, St George’s Lodge No 1170 celebrated their 150th Anniversary at Manchester Hall.
The lodge was opened by the Worshipful Master, Bro Phil Jones and after the lodge had welcomed WBro Christopher Welton, Assistant Provincial Grand Master for Manchester, he proceeded to offer the gavel to him. WBro Welton refused, replying that the Worshipful Master was clearly the best person to lead the lodge on such an auspicious occasion.
One of the first items on the summons was to confirm the Minutes of the Last Regular Meeting, and the Worshipful Master had chosen to sign them in a manner more accustomed to when the lodge was founded in 1867. He had brought a dipping pen and ink pot, which would have been the custom at that time. Luckily, the Senior Deacon took great care not to spill any ink.

The members of St Georges Lodge with the APGM, WBro Christopher Welton

The Lodge Secretary, WBro Colin Edge, gave a short history of the lodge and displayed a written history that both he and WBro Rt Rev John Snape had produced. They had trawled through 150 years of lodge meeting minutes to produce the book, which would be distributed to the members of the lodge.
A presentation was then made by WBro Richard Bell, who gifted the lodge with a beautifully crafted 19th Century Maul. The Worshipful Master duly tested that it worked and continued to use it as his gavel for the remainder of the meeting.
The Acting Assistant Provincial Grand Chaplain, WBro Russell Conn, gave an Oration relating to the origins of St George and the parallels that can be drawn between his life and actions, and the allegory of Freemasonry.
The lodge was then closed and the brethren enjoyed a fantastic social board.