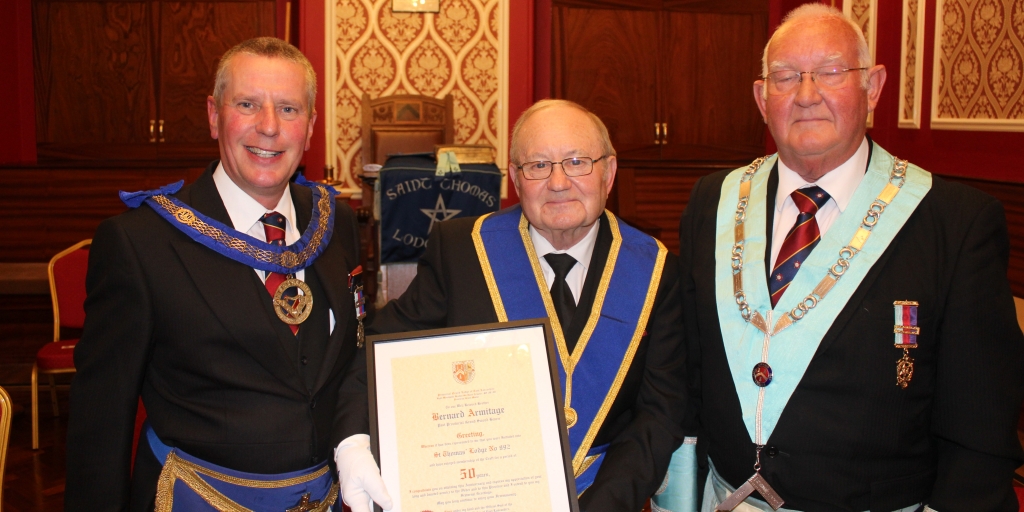 At Manchester Hall on the 13th of October, it was a memorable occasion for St Thomas Lodge Number 992.

It was not just any regular meeting, it was a celebration for a very special Brother who has enjoyed 50 years membership of Freemasonry. A brother who during his time as a Mason and Lodge social secretary has raised thousands of pounds for charity.

The mood was jubilant, with over 30 fellow Masons in attendance, including the celebrant’s son, friends and brethren from the neighbouring Province based at Urmston Masonic Hall

The Assistant Provincial Grand Master was offered the gavel by the Worshipful Master and on this occasion, he was delighted to accept.

Having been proposed by WBro Neville Eckersall (the celebrant’s father in law) and seconded by WBro George Poff and subject to, what was then, a close scrutiny by a posse of Past masters, Bro Bernard started, what was to be, his long and eventful journey into Freemasonry as a member of The St. Thomas Lodge 992. It was on Wednesday 3rd February 1971, in the impressive Masonic Suite at the Griffin Hotel, in Lower Broughton. (The building sadly no longer exists).

There was then a heartfelt and moving tribute from WBro George Davis (Our APGM’s Dad!) who regaled everyone with a comprehensive history of not just Bernard’s life as a mason but gave an insightful look at what St Thomas Lodge had achieved over the years.

WBro Armitage then took the floor and thanked everyone he had met along the way, regaling us with more of the Lodge’s rich history.

The celebrant presented the Assistant Provincial Grand Master with a personal cheque which was matched by the Lodge towards the East Lancashire 2026 Festival before he retired from the Lodge accompanied by the Provincial Delegation and Celebrant.

The festive board was terrific, with everyone enjoying each other’s company and partaking in a first-rate meal.

In his response, WBro Mark Davis was brief but very sincere in his delight that it was indeed terrific to get back to face to face meetings.

WBro Terry Marney  proposed the toast to WBro Armitage after he related a few amusing tales about their friendship and Masonic career over the years., WBro Armitage was his proposer in the Lodge.

There was a charity drive also on the night which raised a staggering amount of £355 for the Lodge’s charity account.