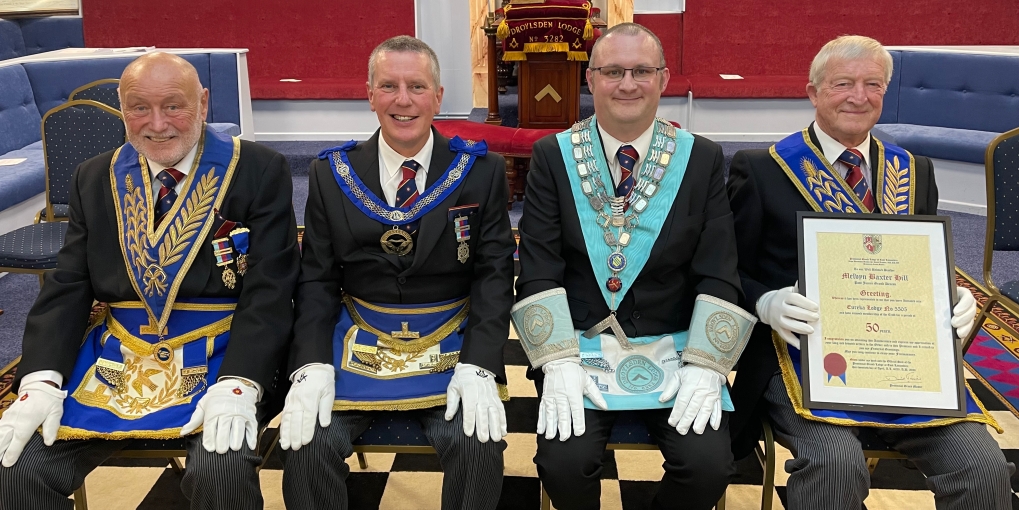 When the Assistant Provincial Grand Master, WBro Mark Davis, asked his District Officers to accompany him to North Wales on Saturday 16 October 2021; they would have been somewhat disappointed if they had expected a long walk down the beach, followed by an ice cream.

They were, however, far from disappointed by the tremendous hospitality of the peripatetic Droylsden Lodge No 3282, who demonstrated that Freemasonry is indeed very strong in this small, remote enclave of East Lancashire’s City Derby District.

For those of you that don’t know, Droylsden Lodge meet 4 times a year at Meriden Masonic Hall but their Installation is held at the Manchester Masonic Centre, Bridge St.  The Lodge was formerly solely based in Manchester but over the years, as the demographic of their membership tilted towards residents of North Wales, their current peripatetic status was agreed upon.

Once the Lodge had opened, there was a report and WBro Harold Cooper, acting as the Deputy Provincial Grand Director of Ceremonies, entered the Lodge proclaiming that the Assistant Provincial Grand Master, WBro Mark William Davis, was without and that he demanded admission.  The Worshipful Master, Bro David Bamford, replied that the Lodge would be delighted to receive him.

Mark asked the Deputy Provincial Grand Director of Ceremonies to place the celebrant, WBro Melvyn Baxter Hill, in the place of honour within the Lodge and the celebration of his 50th Anniversary as a Freemason began.

Rewinding some 20 years, Mark began by explaining his personal connection with Mel.  During Mel’s illustrious Masonic Career, in 1999, when Chairman of the then No 6 District in Manchester, Mel had appointed Mark as the District Representative to the ELMBI Committee of Benevolence ( the forerunner to the East Lancashire Masonic Charity ) and that it was from there that Mark’s passion for supporting Freemasons in their time of need began.  Ultimately leading to him becoming the Provincial Almoner some years later.

Over the past 50 years, as Mark explained, Mel has amassed a vast Masonic CV. Initiated into Eureka Lodge No 5505 in Manchester, where he went onto occupy the Chair of King Solomon three times.  He was a member of Provincial Grand Stewards Lodge and Provincial Grand Stewards Chapter, being one of a very select group of Freemasons to have been Worshipful Master and First Principal, respectively, of both.

An Officer of both the United Grand Lodge of England and Supreme Grand Chapter, Mel now practices the majority of his Freemasonry in his adopted home of North Wales and is an Honorary Member of Droylsden Lodge.  He had the honour of being the Worshipful Master of the Lodge in 2016. He’s also a member of several other Lodges and Chapters based in The Provinces of North Wales and Derbyshire.

WBro Stuart Butterworth, Lodge Secretary, followed Mark by giving his own personal tribute to Mel.  He explained how, with Mel’s help and guidance, the Lodge had been able to gain its peripatetic status and further explained the indissoluble link that Mel has always had with the Lodge.

WBro Ed Beaman presented Mel with a 50th celebratory ‘Birthday Badge’, before he was perambulated around the Lodge Room to receive the acclamation of Brethren assembled.

That concluded the formal proceedings for Birthday Celebration and Mark Davis handed control of the Lodge back to their Worshipful Master, as the evening wasn’t quite over yet.

The next item on the summons was to initiate Mr Kevin Rothwell.  The Worshipful Master, His Wardens, and the other Officers within the Lodge worked, quite frankly, one of the best First Degree Ceremonies that the visiting delegation had ever had the privilege of witnessing.

Not only was it simply word perfect throughout but their delivery embraced a richness that gave, the now, Brother Kevin Rothwell an incredible experience.

Following the Initiation Ceremony, the Assistant Provincial Grand Master, accompanied by WBro Melvyn Hill and his District Delegation, retired from the Lodge.

The Festive Board was equally enjoyable, with good food and great company.  The members of Droylsden Lodge presented Mel with a memento of his evening, a framed copy of the Evenings Menu and the signatures of all of the evening’s attendees.