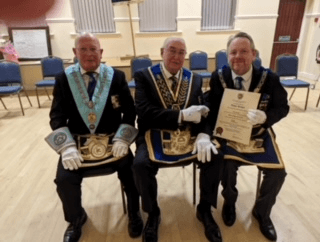 Due to mobility issues, Bryan has been unable to attend Meetings at the Clitheroe Masonic Rooms of late, so the members of Keep Lodge No.6538, brought the mountain to Mohammed, allowing Bryan to enjoy his celebration near to home. 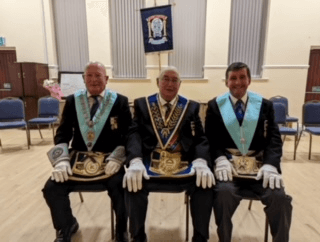 Over 60 attended the meeting, including 10 Grand Lodge Officers, testament to the man being celebrated, which was presided over by the newly appointed Assistant Provincial Grand Master, David McGurty.

After being offered and accepting the Gavel from the Worshipful Master WBro Jim Howard, WBro McGurty proceeded to introduce a delegation of 22, which in addition to the Grand Lodge Officers with three Past Chain Bearers, included the East Ribble District Team, Assistant To the Provincial Grand Principals, Officers of the Burnley & Pendle District Team and of course, the guiding hand of the ProvDepGDC WBro John Lees.

The minutes of the meeting held on the 27th of October 1972, the night of a Mr Bryan Bristol’s initiation were read by the Lodge Secretary WBro Les Timmins. A heartfelt personal tribute from his son and Lodge DC WBro David Bristol, gave all in attendance an insight into Bryan’s family, farming and personal life, which reflected his incredible commitment to those areas. This was followed by the APGM talking about life in 1972, the cost of living, world events which of course, included WBro Bristol’s initiation into Freemasonry. An abridged Masonic CV was then read, (click here to view) which gave all a flavour of Bryan’s contribution not only to his own Lodges and Chapters, but to Clitheroe Freemasonry, the District, Area and Province. 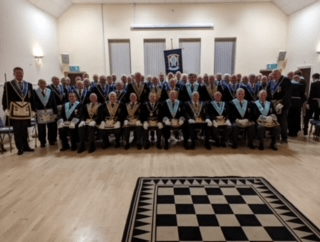 In presenting his illuminated certificate and personal letter from the Right Worshipful Provincial Grand Master, WBro McGurty stated that WBro Bristol was the epitome of Masonic dedication and that it was the greatest of privileges to be in attendance to celebrate the service of a man, so widely appreciated and respected in Freemasonry and beyond.

The Brethren stood and acclaimed Bryan with a hearty round of applause, before the APGM invited the District Chairman WBro Brian Derbyshire, to present WBro Bristol with his 50th lapel pin, a small token of appreciation for huge contribution. Additionally, a bottle of single malt for Bryan and flowers for Mrs Jean Bristol were also presented by the Deputy Chairman Andrew Taylor and District Secretary WBro David Sharpe.

Before the delegation retired, the Lodge Worshipful Master, presented a generous donation of £250 to the Assistant Provincial Grand Master, in support of the EL2026 Festival, the kindness of which was duly acknowledged and appreciated.

Responding at the Festive Board to a further warm personal tribute by WBro Bob Allan, Bryan stated that his wife Jean had been instrumental in allowing him to enjoy his Freemasonry and had supported him throughout. He also thanked his Lodge Members for their support not only for the evening, but throughout his time in the Lodge.

This was a celebration that Bryan truly appreciated and which was enjoyed by all in attendance. 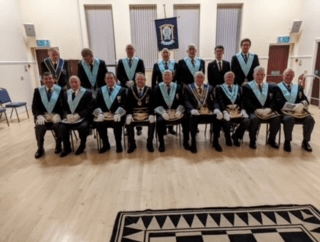