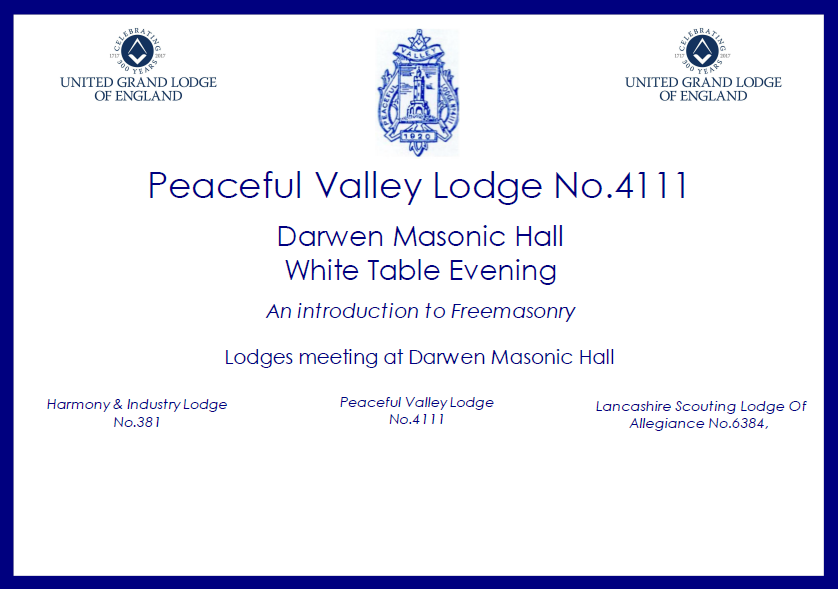 The second in a series of White Table Events held across all the Masonic Halls in the East Ribble District took place at Darwen Masonic Hall on the 3rd April. The hosts for this event were Peaceful Valley Lodge No 4111 who were supported by a large number of Brethren throughout the District.
The seven visitors and their hosts gathered at the Hall just before the meeting started and were given an explanation of the events of the evening. They were taken to one of the side Lodge Rooms where they were shown the procedures a Mason goes through before a meeting starts. This included the putting on and explanation of the regalia as well as the signing of the Tyler’s Book and the historic significance of how records are kept for future research and recall.
Once the opening business had been concluded the Lodge was called off and the visitors were admitted. There were six non-Masons present in the Lodge, and after a short introduction by The District Chairman WBro David Lightbown PAGDC he passed over to WBro Steve Crowther PProvSGD who delivered his presentation linking the ancient and modern. Following the presentation the visitors retired back to the attached Lodge room where a discussion and question and answer session took place. This proved to be a very positive experience as the visiting gentlemen showed real interest in what it means to be a Freemason and the charitable aspects of the fraternity.
The Brethren and visitors then assembled at the festive board where a wonderful buffet supper and full round of toasts and responses were experienced. The evening proved to be a real success and we now look forward to the next event in Accrington on June 7th.