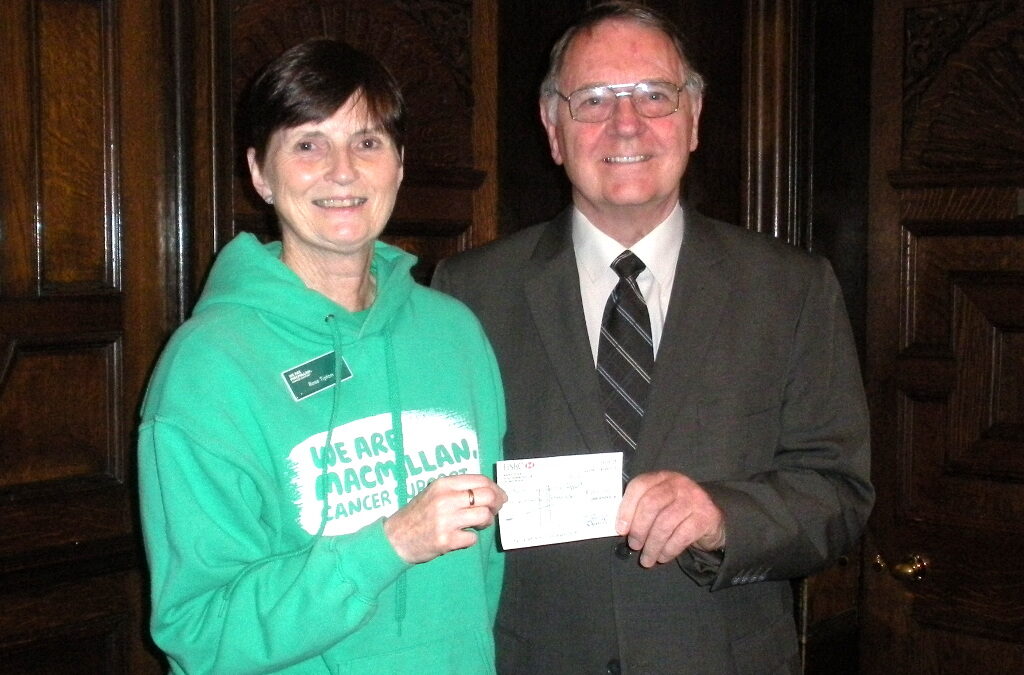 Friday the 31st of March was the date for the Southern Area “Giving Night” held at Stanley House in the presence of the ProvGM and the Civic Mayor of Tameside. As usual for this annual event, the hall was full of expectant charity representatives quietly waiting for their name to be called to go to the podium and receive their cheque. Each recipient has a few minutes to explain the use to which the donation would be put and its importance to the continuance of their charity.
One of these donations was given by The Lodge of Faith 581 who gave £500 to the new MacMillan Care Centre at Tameside Hospital. Their representative, Rose Tipton, who drove from Hebden Bridge for the event, was delighted to receive the cheque and explained to all present the details of this new medical provision inviting people to visit and then promised that the donation would go directly to the Ashton project.
Of the £500, £100 came as a personal gift from our longest serving member, WBro Alan Smith, in celebration of the 45th anniversary of his initiation into Faith. This thoughtful donation was made at the Installation meeting in March at which Alan was introduced to a visitor from North Wales, WBro David Sheridan. David did some research as to where our lodge now met as his grandfather, WBro Ernie Sheridan, was a highly respected member back in the 1960’s. It also coincidentally came about that, when Ernie was the WM, he initiated Alan into our Lodge. Alan had yet another surprise for David. In a short speech about his 45 years’ service, he handed David an ornate Ladies Evening Programme which Alan had saved from his attendance at WBro Ernie Sheridan’s Ladies Evening all those years ago. David was clearly quite moved.
The total charitable donations from Southern Area handed out on the night amounted to £41,144 – and they say we only look after our own.

Alan doing his “thing” at a gig.